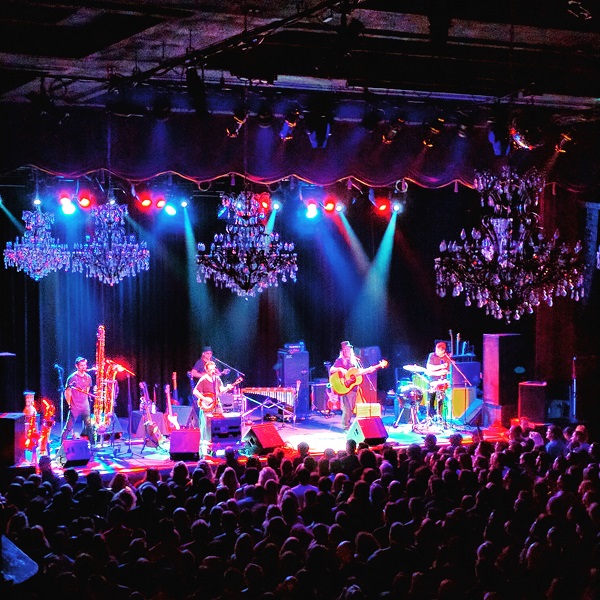 Little background quickly before I continue. The Femmes have been making music since before I was born, starting the band way back in 1981. If you don’t think you know their music, you’re probably wrong. Whether you were born too soon, or born too late I can guarantee you their most famous song ‘Blister In The Sun’ will strike a familiar chord and was an anthem of teen angst and rebellions for a generation throughout the 80’s. Their contemporaries were bands like The Pixies and The Meat Puppets, and were a huge influence on more recent artists like Beck, Sonic Youth and Jane’s Addiction. Per usual, when in doubt pull up the Spotify and throw on the top ten and make yourself familiar.

[Related: The Pixies in San Francisco]

Anyways back to the show. As I walked up Fillmore Street to the iconic venue of its namesake, the excitement heightened and turned into anxiety. Had I built this up too much in my head? Were they too old to still rock? Was this tour all just a bait and switch to get me to listen to their new album? Luckily my concerns were out to rest out the gate as they led off with the aforementioned ‘Blister In The Sun’ followed immediately and strongly by ‘Kiss Off’. That energy lifted and carried the older crowd all night as they oscillated between new material and old standards. They really mixed it all together perfectly. Even found myself digging some new jams from their new album, We Can Do Anything, which is their first studio album in 15 years!

What was strange was how smooth they were able to transition into the new songs because the sound is entirely different. Other than lead singer Gordon Gano’s unmistakable voice, the new tunes have a folksier, lighter almost bluegrass feel. The song ‘I Could Be Anything’ specifically as a key example, as it has such a fun almost silly melody and lyrics even more so. It gave the night a feel of almost two concerts in one. But in a way it was, as these weren’t still the same punk kids from Milwaukee in the 80’s, they’re in their mid-fifties. But I guess they’re right, although slow and dangerous behind the wheel senior citizens still can serve a purpose. Jokes aside, I must say bassist Brian Ritchie has never played better. Slaying on acoustic and electric bass, adding needed contrast on backup vocals and even putting it down on the xylophone on ‘Gone Daddy Gone’, his stage presence and contributions to the band have never shined bigger or brighter than live on stage Tuesday night. They closed out the night with ‘American Music’ as their encore which is a personal favorite and was made even more special as they brought out Jerry Harrison of ‘The Talking Heads’ to help on Xylophone to close out the night.

So on Tuesday, I got to see an all-time favorite perform and live up to their rightful place in rock and roll lore. Classics were listened to and sung along and danced to poorly. New tunes were introduced and appreciated. Just a good night all around and how could it not be? Add it up, add it up, add it up! It was an iconic band at an iconic venue in an iconic city! Whether you’re into the old hits or want to check out their new stuff, be sure to catch the Violent Femmes on this tour in a city near you before they’re ‘Gone Daddy Gone’ forever!

Like Loading...
This entry was posted in music, shows and tagged american music, beck jane's addiction, blister in the sun, brian ritchie, fillmore, gone daddy gone, gordon gano, i could be anything, jerry harrison, kiss off, meat puppets, milwaukee, pixies, san francisco, sonic youth, spotify, talking heads, violent femmes, we can do anything. Bookmark the permalink.