HAIM >> Red Bull Sound Select’s 30 Days in L.A. kicked off yet another year of its concert series earlier this month with a lineup almost as impressive as its $15 admission. While bummed to have missed out on Bob Moses the first week, I did have the great fortune to catch the other most notable act, HAIM, in what was my first non-festival experience of the sister group from the San Fernando Valley who look more like chicks from Boise, Idaho with their middle parts and lack of makeup [with one red-lipped exception].

What is refreshing about this trio is that they keep to their particular sense of flair and individual personalities despite being in a group under the family name. Each has their own unique style, ranging from 90s Clueless dresses, to DGAF baggy shirt and pants, to scalloped short-shorts with a vintage tee. A bit Partridge Family-meets-the Runaways, the ladies showed great enthusiasm rocking out and taking in the crowd at a venue they’ve been to many times before—as attendees.

Though a bit underwhelmed by the odd Trump-colored lighting that moved more than the life on stage—aside from a few synchronized sways and guitar solos—the impressive vocals from Danielle, as well as Este’s tribute to Prince with 'I Would Die 4 U' were enough to bring the sold out crowd to their feet. The consumption of Red Bull only cocktails might have helped with that. Baby Haim, Alana, did her thing being the perky soul of the group, which helped brighten Danielle’s stiffness and Este’s odd mouth gestures which can only be described as ‘air oral’. 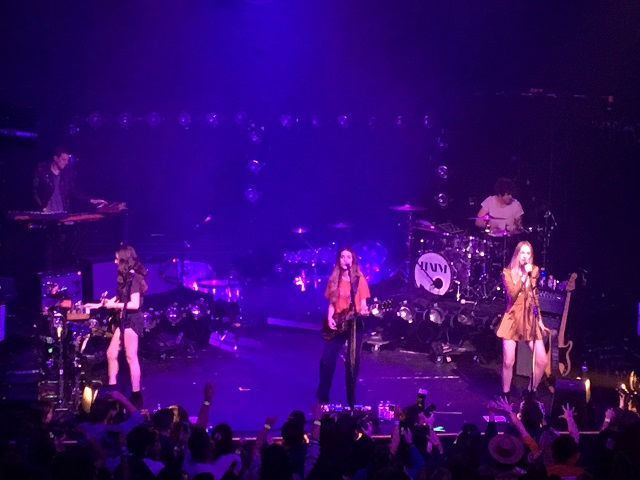 Though these girls aren’t what I would necessarily describe as ‘cool’ kids, they are a fun bunch who have managed their way into Taylor Swift’s inner circle. Their distinctive vocals have even made appearances on EDM tracks from the likes of Calvin Harris and Major Lazer, which clearly proves these sisters have made it to the big leagues. Neither track was played last night, showing that they’re not cocky when it comes to their newfound fame.

In addition to nearly an hour of hits off their debut Days Are Gone, the girls also played two new tracks from their upcoming album. Each was true to their sound and met with loud cheers, which is encouraging for what they have to come. So buckle up, because these sisters are about to make the rounds with their sophomore album. Festival circuit 2017, perhaps?