Atmosphere >> On the Tuesday following yet more police shootings, in Charlotte and Tulsa, I found myself at The Masonic Theater in San Francisco for a hip hop show on a school night. What I took home, was an education taught by the mic in the hands of Brother Ali and Atmosphere.

For those not familiar with Brother Ali his rhetoric and songs shedding light on inequality in America are nothing new. They are the backbone of his music and more over him as a performer and as a man. Like Atmosphere, he hails from Minneapolis. He is a Muslim, an albino, and the father of a 16-year old African American son. Although his albinism affects his vision, one can only imagine he has seen some shit in his 39 years. He performed songs like 2007’s ‘Uncle Sam Goddamn’ and 2012’s ‘Mourning in America’ may have never rung truer or hit as close to home as they did Tuesday. It wasn’t all doom and gloom with songs like ‘Forrest Whitaker’ had the crowd grooving and moving along. The self-deprecating lyrics mocked his albinism while praising its namesake who also overcame other people’s preconceptions of what greatness looks like. The most poignant part of his set though, had no beat or tune. He stopped the turn tables for a moment and recited a new piece entitled ‘Dear Black Son’. It was literally a letter he wrote to his 16 year old boy about becoming a black man in today’s racially charged America. It wasn’t preachy, attacking, or over the top. It was filled with worry and pain and love; themes most too many Americans know all too well these days. It might not have been a raging party, but the set was crisp, the rhymes tight, and the moment right for Brother Ali’s sermons. 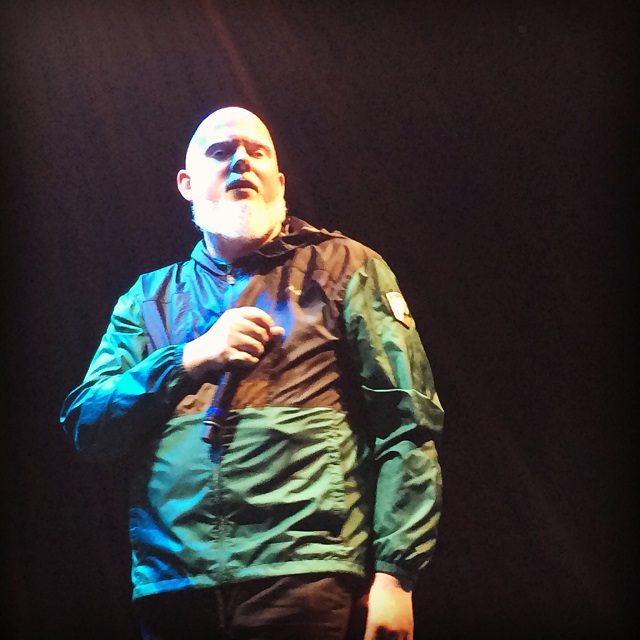 The back half of the evening was brought home by Atmosphere, the other half of the Twin Cities’ hip hop royalty. Although less political in nature, the music of rapper Slug [Sean Daley] and DJ/Producer Ant [Anthony Davis] still has a darker shade to it. They rap about problems that transcend race or current events. The themes of struggling with self-image, relationships, drug and alcohol abuse came through clearly if not overly present as they performed ‘God Loves Ugly’ and ‘Shoulda Known’ right out of the gate. After doing this together for more than two decades their songs still seem fresh, probably because the passion for the music can be felt in every verse and track as if it was the first time they played it. Now in his mid-40’s, Sean ‘Slug’ Daley seems almost rejuvenated on stage, with an appreciation for everything and a fuck you we’re still here attitude fueling the performance. Talib Kwali or even Eminem he is not. The rhymes come slow and deliberate, but the lyrics are clear and sharp as a razor blade in a cadence as smooth as a shave. Playing with the audience between songs and even freestyling, looking for things that rhyme with Kaepernick the SF crowd was treated to a well-rehearsed and engaging performance. They left them wanting more, and held the hangover anthem ‘Sunshine’ up their sleeve for the predictable encore. The song was just the upswing and the possibility of hope for a better day everyone needed that night at the concert and beyond the walls of the Masonic.

After my last rap concert, Brother Ali and Atmosphere helped restore my faith in hip hop. It’s not always about having an entourage on stage, about blunts, bitches and Patron. Those things are all cool though but have their time & place. Tuesday reminded me that rap can be about lyrics with a real message. It can educate. It can knock everything down and raise you back up with it. It can be about making a connection between and with the audience, the performer and the music all at once. Brother Ali and Atmoshphere are vets of the rap game for this long because they do just that. Catch these class acts on their Freshwater Fly Fishermen Tour running through the end of the year and most likely enlightening a city near you soon!