Black Kids >> are back in full effect in 2014 and recently they kicked off a long overdue and highly anticipated tour including a return to Phoenix. Prior to that refreshingly nostalgic and killer show, I sat down with Black Kids' founder and frontman, Reggie Youngblood to discuss what everyone has been doing since the Partie Traumatic days, Reggie's dirty South side projects and other important shit like 80's sitcom themes. 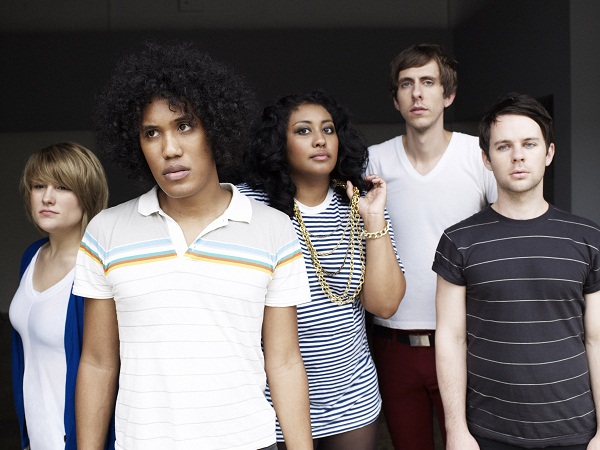 MARC: Good to see you again, Reggie It's been at least five years since you've been out here, right?

REGGIE:  Yeah, when we played Tempe.

REGGIE:  Yeah, we had fun. It was the Mates of State tour.

MARC: Yep, at The Clubhouse. Sadly, that venue is no longer with us. Can we please have a little moment of silence?

MARC: Amen. So what have you guys been up to in the last half-decade?

REGGIE: Most of us have relocated from Florida. We're all dispersed about as far as we possibly could. One of us lives in Portland. The other lives in Brooklyn. I moved to Athens earlier this year and a couple of us are still in Florida. Some of us went back to school, and others started families but we've been working on music on and off. After we did like that two years of touring we kinda just went home. Then we started to work on our second record and it was just - not fun.

REGGIE: I think we gave ourselves some time to recover but we started working in earnest fairly soon after we got back and we just weren't the same. I don't know. It was just touring for that long, some people are lifers and they're fine with it, but I think for some - especially myself - I was not the same person when I came back. So we just needed to take a step back. Then after a certain amount of time, it's not really a rush to get things done. It's just going to be done when it's going to be done.

MARC: So it’s a challenge when you have five different lives moving in different directions, right?

REGGIE: Yeah, it's different. It's not like when we all lived in the same neighborhood and we saw each other every day and we were playing in town every month and playing in front of our friends all the time, so it was a different situation. I think we transitioned into a situation that wasn't really good for us creatively.

MARC: So what about the formula today? Is that the same as it was?

REGGIE:  Yeah, that's still the same. It might have been like a year and a half ago, we went up to Athens to record with my friend and spent a couple of weeks just working on ideas and since I live there now, I go in every once in a while add a little more. I change stuff. It feels good. It feels like we're definitely moving, whereas before we just all stepped away because none of us wanted anything to do with it.

MARC: So are you one of the lifers then?

REGGIE:  Probably. I don't know. I suppose so.

MARC: Do you have other projects that you're working on?

REGGIE: Yes, I play in a group in Georgia called Night School. It's me and 3 good buddies. It's like a power-pop rock band.

MARC: So, how's the tour going so far?

MARC: So tonight's show is going to be the best one ever?

REGGIE: I think so. I feel good about it.

MARC: You guys are promoting this tour with a cover of the Game of Thrones theme song - which is really dope, by the way - if you were creating an all theme song album, what other shows would inspire your tracks in Black Kids fashion?

REGGIE:  Yes, that definitely needs to be reintroduced.

MARC: So is there a new album and songs in the works or is this strictly a tour just to tour?

REGGIE: We're trying out a couple of new songs on the tour. We put out that track ‘Origami’ which is something that we've been working on and playing that at shows. That's what I like about playing is that we'll play the song and eventually when we're done with the tour, we'll know what we like about it and what we don't. So, that's why it's important for us to play. We weren't doing that at home for some reason. I'm glad that we're getting out there again.

MARC: What would you say the biggest difference is for you now versus 2008? Musically, personally, whatever, but you can't say it's your hair.

REGGIE:  Well, I think musically, I question things a lot more. Before, I used to feel a little more fear in expressing myself and so the process is longer. It used to just be like, ‘Well that's dumb, this doesn't make sense musically,’ but now there's a couple more steps in there. I'll say, ‘Who cares? But no, really,’ so it takes a little longer. I second guess myself a little more than I did back then. I want every song we write to count and I think some artists just put it all out there and they just move on to the next thing. I've always been just so focused. I'm not a perfectionist, I just want it to feel right. That makes it sound like I'm a perfectionist, but I'm really not. So that's why I have a low output. I never thought I would be like that. I thought I would be prolific like my heroes but I'm not. I'm very slow and maybe I'm just fucking lazy.

MARC: Is there anything else that you want to tell the zBORED audience?

REGGIE: No, not particularly.