The Offspring >> first released their iconic Smash album 20 years ago and in 2014 they're celebrating the anniversary headlining a nationwide tour with fellow legends of punk Bad Religion and Pennywise. This weekend Dexter Holland and the boys visited the desert and played a shreddingly brilliant show at Mesa Amphitheatre. 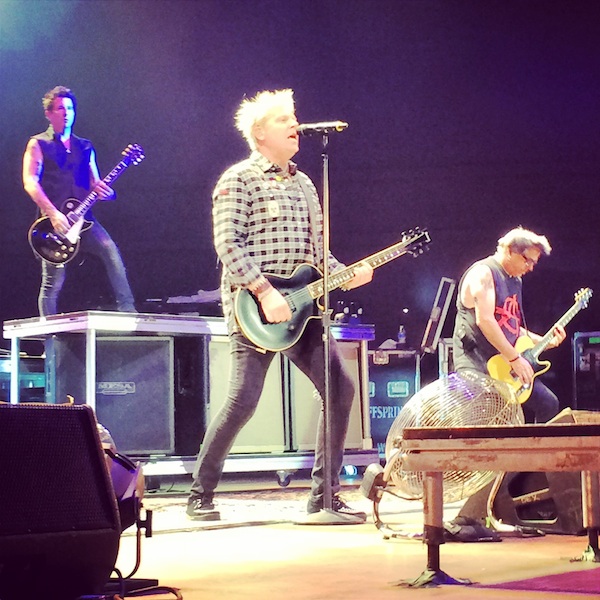 In 1994 I got my first ever CD player along with my first 3 compact discs: Dookie by Green Day, II by Boys II Men and of course, Smash by Offspring. My state of the art bookshelf jukebox was a 6-disc changer by JVC that took a few more months of allowance in order to fill up the rest of those trays with more 1994 gems but then I discovered BMG and fucking Columbia House so 20 CD's for a goddamn penny? Sold. Anyone else remember those hustle moves?

Anyway, Smash could certainly be attributed to the birth of my punk persona so it was quite an anticipated nostalgia-induced show at Mesa Amp the other night. Dexter, Noodles and the rest of the squad walked on stage as the album's 'Time To Relax' intro sounded and once in their proper positions 'Nitro' and the dozen other bangers on the album went down in sequential order, although they played 'Gotta Get Away' only once instead of on repeat 25 times in a row like it did on my JVC when I was in 8th grade. They also saved 'Self Esteem' for the end which ignited the most uproarious crowd I have ever seen at this particular venue. While these guys are damn near 50 years old they can certainly still shred and their product still gets people going fucking nuts.

What I can really appreciate is at the end of all the Smash songs, the band began to walk off stage and Dexter said they'd be back in a few minutes. Today's standard unplanned-but-planned encore from every other artist is bullshit so although subtle, is was refreshing for Offspring to call their intended intermission before their second mini-set. As promised they came back out and played sprinkled hits from forth released albums but mostly Americana. I was a little butthurt not to hear 'Gone Away' from Ixnay On The Hombre but just a slight damper to an otherwise perfect night of punk-fucking-rock to the max.

Like Loading...
This entry was posted in rando and tagged all i want, americana, bad habit, bad religion, bmg, boys ii men, columbia house, come out and play, dexter holland, dookie, genocide, gone away, gotta get away, green day, head around you, ii, it'll be a long time, ixnay on the hombre, jvc, killboy powerhead, mesa, mesa amphitheatre, nitro, noodles, not the one, pennywise, pretty fly, punk rock, self esteem, smash, so alone, something to believe in, the kids aren't alright, the offspring, time to relax, what happened to you, why don't you get a job, you're gonna go far kid. Bookmark the permalink.