New Kingston >> One Lovin’ in San Francisco [The Fillmore] 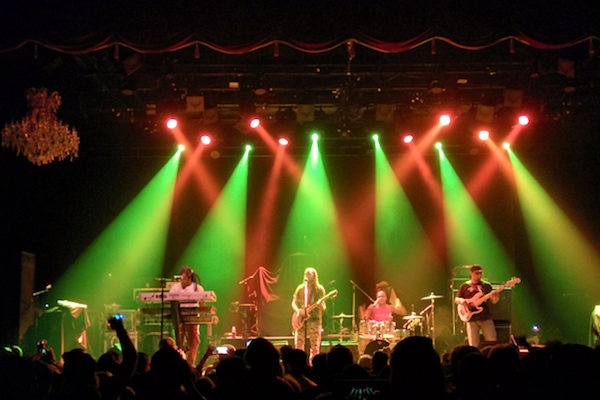 For those who have not heard or seen New Kingston before, they truly make their music a family affair. The three brothers, Tahir [keys], Courtney Jr. [drums] & Stephen [guitar] all share in the vocals while their father Courtney Panton Sr. joins in on the bass. Having their roots and heritage based in Jamaica, there was a refreshing and natural sound that can't be duplicated outside the islands.

Don't get me wrong, I love bands like Rebelution and SOJA who continue to spurn an ever-growing audience for new groups in the genre, but once in a while it's nice to hear some good old-fashioned reggae vibes.

That being said, this show wasn't steel drums and passing to the left hand side. They brought one of the most versatile and engaging performances I have seen in a long time to The Fillmore. They pled sounds with soul and funk tones, reggae vibes, R&B and slow jams. They also still got that dancehall reggae that had me jumpin’ around all over the place, moving just as crazy as Courtney Jr.'s dreads as he wailed on the drums and he and his brothers got the crowd hyped.

Throughout all of their different songs, the message and the feeling remained the same: love. Most people hear the term reggae and automatically think of pot and dreadlocks and instantly think they have the music, the people who play it, listen to it and live it pigeonholed. It's really unfortunate, but bands like New Kingston play that music that makes you feel love. Their show from the very start made you feel love for music, love for their performance and energy, love for your girl and love for one another. Please check out their FB page for more info and to see when they'll be bringing the love to a town near you.

Big ups to New Kingston for a great show and for spreading reggae music. One Love!