Clean Bandit >> Welcome to America and Hollywood [The Roxy]

Clean Bandit >> Last night I had the good fortune to witness Clean Bandit’s first American show, to which I would say they nailed it. 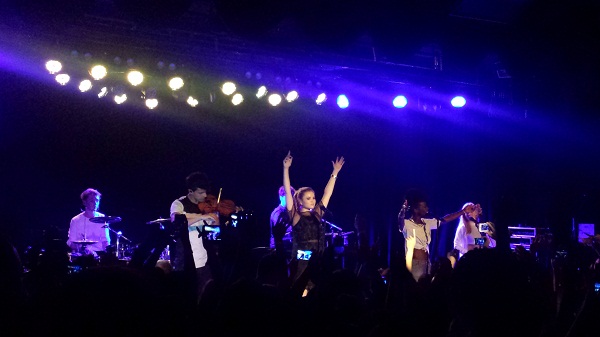 I’ve been to a sold-out show at the Roxy before, though this is the first time I truly believed it. The jubilant blend of late 20-to-30-somethings had their hands in the air to every track, save the straight-faced industry folk acting like they didn't give a shit since they attend shows nightly. Note: if you want see true fans, you may want to stay out of the VIP section.

Having coincidentally had their first album release delayed only to drop in the US the same day as their first stateside show, I was surprised how many of the fans knew their tracks. In all fairness, their hit ‘Rather Be’ featuring Jess Glynne has over 100 million listens on Spotify, and they tend to incorporate well-known classical music [e.g. Mozart] with their electronica beat.

In line with the resurgence of the 1990s trend encompassing the world of fashion, their sound was reminiscent of the likes of Ace of Base or La Bouche, not to mention they did a cover of Robin S’ ‘Show Me Love’, much to the delight of all in attendance. Is it wrong I totally miss these groups of the 90s? No, absolutely not.

Some of their other tracks [‘A+E’ and ‘Come Over’] made for great poolside reggae with steel drums and airy beats that made me wish I was in Vegas or a rooftop hotel pool in Hollywood sipping on a pina colada. Think Duke Dumont’s ‘I Got U’ for reference.

The 4-member band was joined by two guest singers, though unfortunately I can’t say who since they never introduced themselves and can’t seem to be found anywhere online. The singer with the Lara Croft-inspired ‘do had quite the vocals and the chick with the afro-hawk had a good voice, although I wish she had more pipes like Noelle Scaggs of Fitz and the Tantrums as that would have made for quite a show. They had stage presence nonetheless.

While my friend couldn't get over the stoic expression of the drummer [Luke Patterson] the entirety of the show, I was mesmerized by the towheaded Juliette Lewis lookalike on the cello otherwise known as Grace Chatto. Besides being incredibly pale and bright in her white bandeau top and cardigan [yes, cardigan], her ethereal features kept your eyes in her direction. She also was playing the cello, which I can’t say I know many people who do.

I was also a fan of the adorkable Milan Neil Amin-Smith on violin, who made the instrument look cool and classical at the same time. I have to say I’m a big supporter of violin electronica since being introduced to it some years ago while strolling the Santa Monica 3rd Street Promenade and seeing Josh Vietti perform. Also, look into Lindsay Sterling if interested in this genre.

All in all, I am certain the group will be performing more US shows next year as they grow in popularity. Spotify is already sponsoring the release of their album via ads, and once they catch on to a larger fan base I will feel more thankful to have witnessed them early in their career.