Santigold >> made her way to Tempe on Monday night to play a solid gold show for a sold out crowd at the Marquee Theatre. It was her first live show in the desert in nearly 4 years when Master Of My Make-Believe was released. 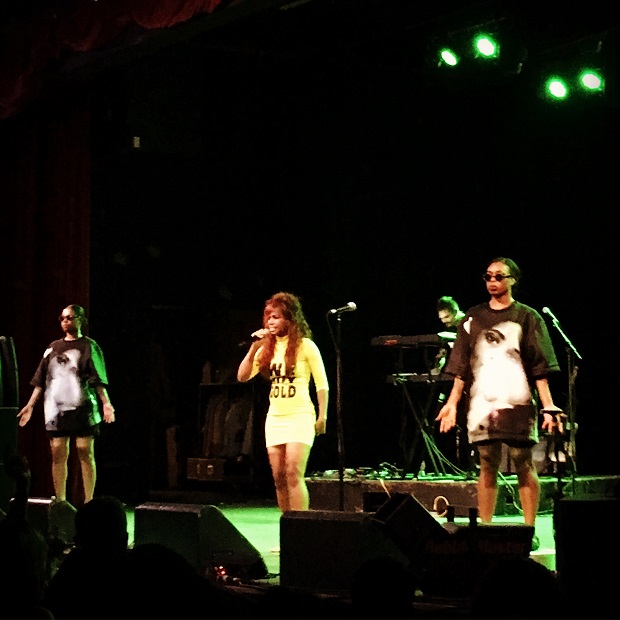 This time Santi is in the midst of a tour for her newest studio album, 99¢, which dropped last month. A lot has changed since 2012 when she played at the intimate Crescent Ballroom in Phoenix. This one is packed with even more bangers than its 2 precedents so this warranted a show at a much bigger venue. Santi's stage production has evolved to include a backdrop of the trippiest visuals that cats, soap and assorted groceries can present. Oh and let's not forget about her dancers who perhaps stole the show again, trading their umbrellas, sledgehammers and briefcases for selfie sticks, Cheetos and shopping carts.

This album is so good already and it got 99 times better after hearing some of its tracks performed in person. Sure, we'll probably never get sick of live versions of cult favorites like 'L.E.S. Artistes' or 'Disparate Youth' or 'Lights Out' or 'GO!' and 'Unstoppable' okay? But said cuts get bumped when 'Can't Get Enough Of Myself' and 'Banshee' and 'Who I Thought You Were' bump. You feel me, right? Oh and 'All I Got' is now my favorite track of the new album. Santi sounded great and was looking pretty good in her WE BUY GOLD dress serenading us with that electro-boogie Caribe doo wop style track and with just a glance stage left it was like heart eyes emoji status up in the concert hall.

Hopefully it's not another 4 years before Santigold returns to the valley or else I'll have to jump on the festival circuit again for my fix again like in 2012. Go get after a 99¢ tour stop when she arrives in your town because you will not be disappointed. Heya!

Like Loading...
This entry was posted in music, shows and tagged 99¢, all i got, banshee, can't get enough of myself, cheeto's, disparate youth, go, l.e.s. artistes, lights out, marquee theatre, master of my make-believe, santigold, tempe, unstoppable, who i thought you were. Bookmark the permalink.