Lagwagon >> rolled back into the desert for a super fun show in south Scottsdale on Tuesday. It was the first time the band has played Pub Rock Live and perhaps the first time even south of Tempe. Although the setting wasn't Yucca or The Clubhouse or The Nile, etc., punk rockers still conglomerated on a school night, an intense pit broke out for the entirety of the show and Lagwagon set a Blaze on the joint and melted our collective fucking faces off to reinforce that punk is not dead. 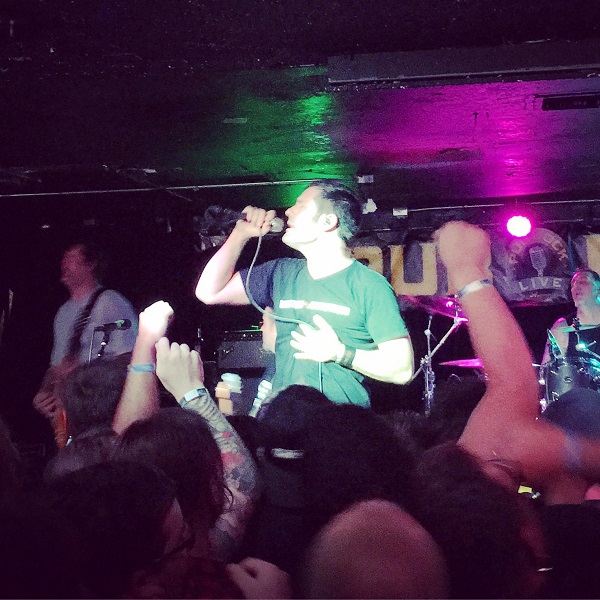 Punk may be getting older but is alive and well. That was abundantly apparent as Lagwagon sold out yet another show on a seemingly endless life tour for the band 25 years after its inception. Joey Cape and company have been doing this a long time and we've been there with them every time they come to town be it late night at our favorite dive or in the middle of a 115-degree day at Warped.

The band's second song of the night was a perfect way to describe Lagwagon in 2015. You remember 'Falling Apart' from 2003-ish, right? Yeah! Then you know that the song is all about playfully describing getting old a la wheel chairs, blown out knees, osteoporosis, glaucoma and neurosis yet still rocking the fuck out. Who's got a smoke for the Caper?

This feat isn't just limited to Lagwagon, though. Kudos to all the other grown-up skate-punk souls of mischief who came out for the Fireball-PBR combos, loud riffs and mosh pits. Punk is not dead. We have offspring now and mean hangovers and a lot of shit to do tomorrow morning but we are still kicking and we'll see you at the next show.

P.S. Joey claims he'll never be on stage when he's 50 but he's gotta be pushing that mark by now and let's hope he's still doing this  when he's 100 because I want to shit my pants with him and to the music I grew up with.

P.S.S. I got to chat with Joey before the show about all sorts of random interesting stuff. Be on the look out in the next few days when I post my interview with him.