French Horn Rebellion >> recently visited Phoenix to perform a kickass and steady brass show downtown so I sat down with FHB's frontman, Robert Perlick-Molinari and we shot the desert cool breeze about all sorts of random stuff like Band Geeks Gone Wild, being truly indie, Next Jack Swing and twerking - that is, after he finished eating his post-performance silver platter of various vegetables. 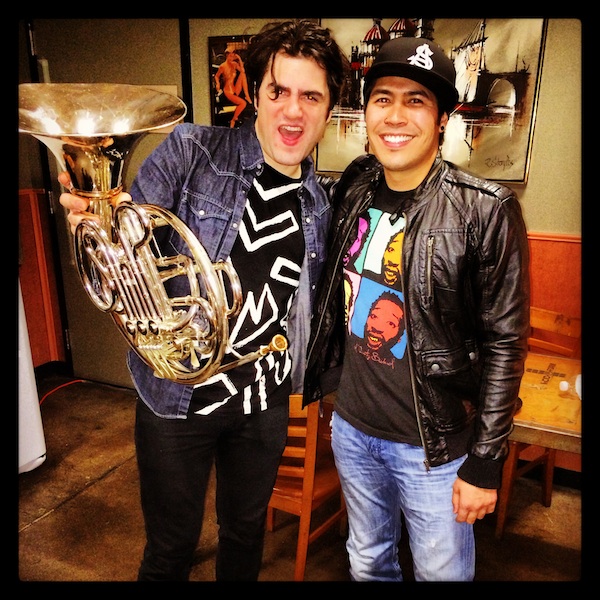 MARC: So your special request as the talent was radish, broccoli and celery?

ROB: On our rider is actually tequila, grapefruit, a bottle of whiskey, some beers and like tons of fresh vegetables. We never get our rider filled out - even in the big places - because nobody ever really takes the time to look at it. But here they’re fully filled out.  It’s amazing. We’ve got to come back to Phoenix.

MARC: Agreed, and more frequently please. The last time was at the Rhythm Room almost 3 years ago with Yelle, from France, playing with French Horn Rebellion. Is that a French coincidence or did they recruit you?

ROB: You know what’s funny is that we actually met each other through a German. Actually, he’s Swiss but he’s from the German part of Switzerland. Tepr is one of the 3 guys from Yelle and he’s like best buddies with this friend of mine. Then he was like 'Yelle is looking for support act, shall I put them forward?' So we played with them a one off at Highline Ballroom in New York. They were like 'You’re great, let’s do the whole tour,' but in French. I can’t do all the accents. Then they asked to do like 30 or 40 shows or something. It was a lot of shows.

MARC:  So you played quite a bit with them.  Is that Phoenix twice here then?

ROB:  We’ve been here twice, the time before that was a long, long time ago. It was the first national tour we ever did and we were not ready for a national tour.  We just did it because we wanted to. We were straight out of college and we were like, 'I don’t have a booking agent. I’m in a Rock ‘n Roll band. Go on a tour.'

MARC: Where did you go to college?

ROB: I went to Northwestern and Dave was at NYU. We both studied music.

ROB: I think we rep Milwaukee. Brooklyn is a lot of people, it’s hard to feel like that’s your home.

MARC: In years past it was just you two - the brothers - on stage and now you’re equipped with a band.

ROB: The difference between then and now is huge. I think every artist goes through a period in their career at least when they’re starting out, where they’re not necessary in complete control of their project.  So at that time we kind of gained a lot of opinions from labels and management and executives and all that type of jazz.  What we should be doing and who we should be. We need to be skinnier or cooler or less geeky or whatever. Stop playing French Horn. Start singing stuff like that. So now we’re completely independent and we hire our management. So they’re supporting us, it’s just a little different. The difference between then and now is tonight we had some fans here and back then we didn't have any fans.

MARC: What do you think has been your biggest challenge to be independent?

ROB: The biggest challenge is a lot of challenges. In some ways it’s easier though because if you’re under a big label and you want to do something, like you get an idea. 'Oh I want to collaborate with my friends and then I want to go on tour with my friends and do bunch of songs together and people are going to love it because there are two of us together doing something unique and individual and it’s totally different'. But to get back through the seven layers of industry is really difficult.  The label has to approve, the band has to approve, the booking agent has to approve.  The booking agent has to work with the other band’s booking agent who is also on a different label and a different manager.  They’ve all got to work together and they don’t want to work together because really that band is competition. There is a lot of blessing to being independent, which is that you get to do what you want when you want it and you can plan very far in the future.  We have a release schedule all the way till the end of next year when we want to release tracks and what kind of tracks, when we want to release seasonal tracks. We want to change what we’re wearing depending on the season and want to be something that's current and always changing and fluid. But if you’re under a big label it’s like a one album campaign and you’re gone for a year and half and then you don’t even know when your next album is going to be released.  It could be released in the summer or the winter.  It might not be at the right time because of culture or whatever.  There’s a lot of plus to be independent.  But the minus is that you’re the boss so everything bad that happens is pretty much your own fault and you can’t blame anybody but yourself.

MARC: Are you doing any crowdfunding campaigns like through indiegogo or Kickstarter?

ROB: We thought about doing a Kickstarter in the past but I don’t think it really works with us because I don’t really consider us to be Art-Pop - like an art band - or like a band that’s making Avant Garde music. I do think that we are doing something that nobody else is doing.  Like we had this new style of music called 'Next Jack Swing' which is I think very innovative.

ROB: It’s like an evolution of New Jack Swing. I think that we’re able to survive right now, you know keeping the wheels running.  We’re trying to think of other fun ways to get to people, which we’re trying to figure out exactly how to monetize that, which is the challenge. We’re sort of like a start up App. What we’re trying to do right now is capture peoples hearts and minds and imagination. But I think our number one; what we really want to do is just; we want to be the band that’s like… hey man you can play a French Horn really loud and it will still be fine. In the world of music - especially classical music - you play your instrument in a certain way or you’re not going to succeed unless you play this excerpt. You’re never going to play a horn outside an orchestra or you’re never going to play your violin outside an orchestra or you’ll never be creative. In classical music you never really encourage people to be creative with who you are or what you want to do with your instrument. You’re taught to play a sheet of music on a piece of paper or see music on a piece of paper and it doesn’t change.  It hasn’t changed for hundreds of years. It's exactly like the guy did it in 1850 or whatever. So we just created a new website where we made it easier for kids to get creative. It’s called bandgeeksgonewild.com. What we really want to do is reach kids that play horn or clarinet or something and say, 'Hey, you can be creative too.  The sky is the limit as far as what you can do with your instruments. You can try a bunch of different stuff. You don’t have to do what you’ve always been told that you have to do. You can be an individual.' That’s the message of the band. I guess for the moment we’re just worried capturing people’s hearts and minds.

ROB: That’s what it’s for, so kids can play their instrument and then they upload videos themselves on YouTube.

ROB: In a lot of ways what happened to me is what I would like to have happen to a lot of other people.  That is, I was a sophomore in college and everybody was saying play it like this, you have to do it correctly, your life depends on it, you’re going to be a starving musician unless you can play this excerpt really well. I was like 'I don’t think this really identifies with me. I’d rather be creative in my instrument and do something different.'

MARC: How many years have you been playing the French horn?

ROB: Thanks man, I try to play it at like volume 11.  That’s pretty loud, right?

MARC: Yeah, that's 1 louder than 10. Okay lightning round. The theme of this is favorites from 2013. Favorite song. Go!

ROB: We bought these jackets that have light-up wire in them.

ROB: HAERTS. She actually used to be our backup singer, now she’s a rockstar. our next single features her on vocals. It’s called 'Swinging To It'.

ROB: Spotify. I used that all the time this year.  I just discovered it. That’s a this year thing.

ROB: Favorite place I visited was the Dominican Republic but the best show was in Brooklyn at The Music Hall of Williamsburg. We were headlining with our friends Savoir Adore.

ROB: In my living room! You know what I’m saying!

MARC: That is correct! Congrats, you scored a perfect 10 out of 10!

ROB: I actually know how to twerk. I went onto eHow. I’m serious. You want to see?

MARC: Yeah. Why wouldn't I?

ROB: [proceeds to twerk for everyone backstage]

MARC: Anything else you want to get out to the zBORED audience?

MARC: Those are wise words to live by.