Slightly Stoopid >> and Atmosphere made their way back to the desert on Thursday playing another show at Mesa Amphitheatre and kickin' up dust on a hot, hot, not so dry desert day. It was only the second show on the Kickin Up Dust summer concert tour - and probably the hottest - but all the featured artists put it down to the max, albeit drenched in sweat and playing an early show per City of Mesa noise ordinance regulations [because loud noises after 10pm is the devil!]. 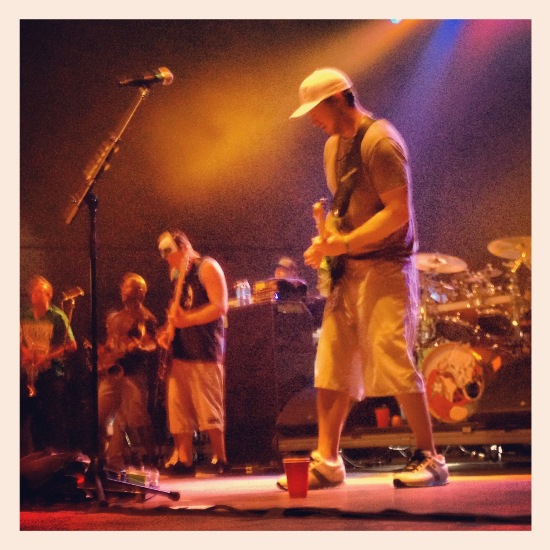 Slightly Stoopid braved the elements yet again here, which they did their last time back to AZ with 311 on the Unity Tour at the same venue last August. The San Diegans played for 2 hours right up until the 10:00pm Mesa mandatory kill switch.

It was a predominantly reggae-based set which probably saved me and the other nearly 5,000 in attendance. I would have liked to hear a bit more of the punk rock reggae style shit or even more than just a few songs from The Longest Barrel Ride, which is definitely my favorite album, but I guess I should just accept that those days are over.

I might be getting too old to even be a circle pit guardian, let alone be in one or near the madness so I'll leave the good ol' days of 'Don't Fuck'n Look' and such in memoriam. Too fucking hot for mosh anyway, right?

They covered 'Leaving On A Jet Plane' and a few other oldies that I've never heard them perform before and that's pretty cool. It's pretty cool! Sorry, that was a Miley Cyrus Show moment.

I didn't get there on time to check out Tribal Seeds but that was intentional as they went on at 5:30 when it was still about 589 degrees out. However, I did get there in time to see Atmosphere who pretty much crushed it. I haven't been a big fan of Atmosphere for - well, I was never actually a fan - but I should give them due propers for throwing it down. Slug gets on the profound status with his lyrics these days.

Maybe he always got down like that, I don't know. I've seen Atmosphere at some festivals going back to like 2008 and never perceived them as deep [derp, more so haha]. But I guess I wasn't all growns up and all growns up enough to appreciate the story he tells but now I'm in the matrix.

That was a sick sick show although it was hot as a motherfucker but I'm glad I survived. I'm hoping the next Mesa Amp mandatory show is in the Fall because I love this venue when the weather is money but sincerely hate it this time of year. I guess I'm just a bitch in this weather. Over and out.