Tim Armstrong >> rolled through the desert again for another epic showcase of both Rancid and Transplants at Marquee Theatre in Tempe. It was a jam packed show that filled the venue with variety of punks varying in ages from 15 to 50 and all there to rock out and get our fucking faces melted off.

Faces certainly melted to the max but it wasn't just because it was a 110 in Tempe on Wednesday night. Time Bomb Tim and The Transplants went on around 8:30 and wasted no time getting hyper. I was especially impressed with Travis Barker's drumming. Like holy shit status.

I've never seen Transplants do it live before but I have seen Blink-182 a dozen times and don't recall him ever getting after it nasty like he did during Transplants' super sick set. It was cool to see even the little intricate things absent from the audio like snap drumstick twirls between measures during their cover of 'Razors In The Night'.

I was pleased they didn't play too much of In A Warzone, their new album which doesn't hold a candle to their self-titled album or Haunted Cities. Said first 2 albums contain my favorite tracks 'Gangsters and Thugs', 'Diamonds And Guns' and 'Tall Cans In The Air' which they ended their set with while we embarrassingly had to put plastic cups in the air. Sorry, Tim! 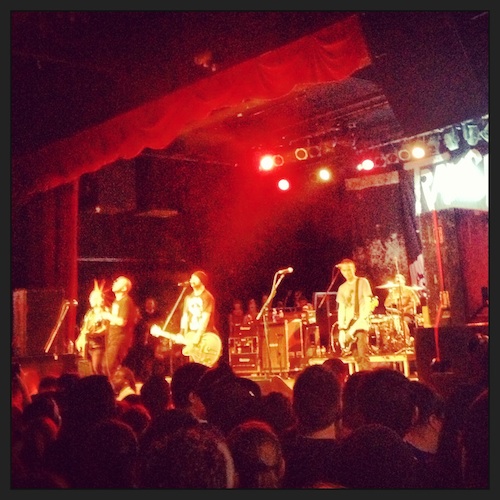 Rancid played for like 2 hours, maybe longer. They played like 30 songs spanning albums over the last 20 years. They've been around for a long time but they still do it with mad energy and rock the fuck out all day. It must have been like 125 degrees inside but we rocket out too and everyone in the place was drenched with sweat when the 'Time Bomb' dropped to end the set.

They encored with 'Radio' and 'Ruby Soho' and again told us how Tempe was the best crowd they'd played for. That was the kicker to such a kick-ass show. Now we just need that new Rancid album to drop. Boom.