Manufactured Superstars >> returned to the valley last night for REPUBLIC at AXIS RADIUS in Scottsdale thanks to SLE & Disco Donnie Presents who brought them here last time for the fall edition of Soundwave 2011. 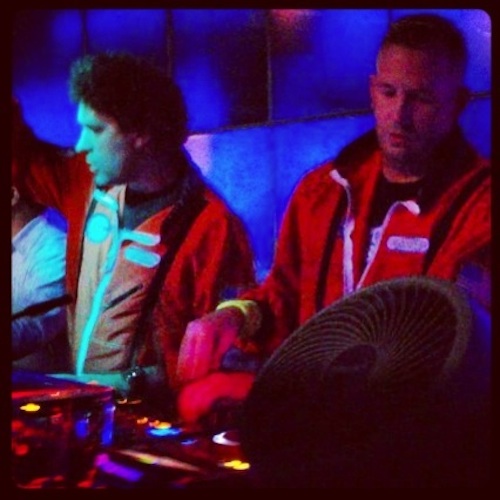 This time the funky astronaut duo Bradley Roulier and Shawn Sabo headlined the show and got the dance floor going with a ton of A-OK drops that were way out of this world. They rolled into RADIUS just before midnight donning their classic Armageddon-style spacesuits, both in orange this time. DJ Slippe was still on the decks while the superstars set up their equipment and prepared for lift off.

Manufactured Superstars took over with an intro like the Event Horizon intercom over Lionel Richie's 'All Night Long'. Then they let it drop with some mondo choppy and crunchy bass to shake the place. They started throwing out white inflatable spacemen similar to the old school MTV moonman so within minutes of the launch the crowd also had little dancing astronauts orbiting the atmosphere.

The thing that turned me into a fan is the duo's ability to integrate many genres across all decades and remix applying fresh technique. They demonstrated that all night long with dirty samples from Michael Jackson ['Wanna Be Startin' Somethin'] and The Whispers ['Rock Steady'] to Bruno Mars ['Locked Out Of Heaven'] and Rihanna ['Diamonds'].

Of course they threw down plenty of the crunchy good stuff too with Manufactured versions of Calvin Harris, Knife Party, Swanky Tunes, Porter Robinson, Showtek, etc. They even did a rendition of 'Harlem Shake' at one point but my favorite part of the night and perhaps the pinnacle of nostalgia was the break and into the Tiesto/BT ['Love Comes Again'].

It was a pretty fun night to the tune of Manufactured Superstars. Big ups to the REPUBLIC team for another great artist selection. DJ Slippe had a solid opening set too. I was never much of a fan and haven't seen him in a while but his craft as a DJ has certainly developed over the years and now as a producer. He had a dude next to him on the mic singing on 3 tracks that he produced and representing Scottsdale the duo goes by Drunk Dial. All 3 of those songs were tight but as far as the vocals, I was not incredibly impressed plus there was a ton of feedback in just those few cuts. It was only their first performance so I'll give them some credit. I'd like to see that tighten up a bit and see another product of the desert bubble and make it.