Le Castle Vania >> was back in Phoenix recently to play Identity Festival 2012, a desert summer daytime set when temperatures hit well over the triples. But the heat was no match for DJ Dylan Eiland and certainly not for any of us in the crowd raging and dancing during his entire sweat-drenching set of electronic illness. Everybody got out alive.

I got to catch up with Le Castle Vania afterward to talk about his new album, favorite festivals, world tours and this city's scorching temperatures. Here's what the ATLian had to say. 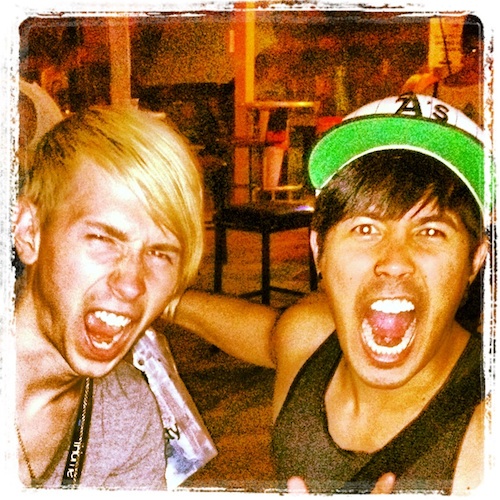 MARC: How did you decide what went into this set? Do you switch it up on every leg on tour?

LE CASTLE VANIA: I have certain tracks that I just always play, like tracks that I know people always want to hear or ones that I’m just feeling right now and the rest I just go with based on the moment. Definitely today I was like ‘I don’t care how hot it is. I’m bringing it 100% for Phoenix’ and Phoenix brought it back.

MARC: Do you consider yourself more so a DJ or a producer these days?

LE CASTLE VANIA: Definitely both. I have a strong passion for producing and writing music because that’s the creative part - well, there’s a creative part to DJ-ing as well of course - but to me DJ-ing is the reward for all the hard work in the studio. You get to bring it to people and see everyone going to crazy to it, which is the greatest feeling you could have as a musician.

MARC: You’ve done a lot of mixes for some of my favorite artists like Kaskade, La Roux and Grum. What other artists influence your sound?

LE CASTLE VANIA: I really take influence from all across the board. There’s definitely that rock element in there. I came up as kind of a Rock n Roll kid. There’s some disco elements, electro, Drum n Bass, some of the darker sounds of electronic music like Daft Punk. I like so many different kinds of music I just try to fuse it all together.

MARC: Are there any artists you would like to do collaborations with in the future?

LE CASTLE VANIA: I would really like to do a song with Cedric from The Mars Volta. That would be really interesting.

MARC: What are your favorite festivals to take part in?

LE CASTLE VANIA: EDC, Ultra, a bunch of the insomniac events - which are all amazing and always a pleasure to be a part of. I did Identity festival tour last year. That was awesome.

MARC: What are your favorite spots on tour?

LE CASTLE VANIA: Australia is one of my favorite places in the world. I have such an amazing time every time I go there. I went to Bali which was really amazing, just such a beautiful, cool place. South Africa was really cool. Cape Town was a really rad experience, just getting to go there and play music. Those are some of my top spots.

MARC: What was the most surprising?

LE CASTLE VANIA: South Africa was a surprise because both shows sold out. I never thought in my life I’d go to Africa. I didn’t grow up with a lot of money so just to have that opportunity to go there was cool, but having 2 sold out shows and a really awesome party was rad. Hopefully I’ll get to hit it again before not too long. By the way, I just want to say that Phoenix is fucking hotter than Africa and that’s fucking hot.

MARC: You probably came at the worst time to stop in Phoenix.

LE CASTLE VANIA: It’s always hot in Phoenix but I’ve always played at night. One time I played at a rooftop party at night and it rained, which it never does. So of course the one time I’m playing on the roof it does. But people loved it. They just kept partying because it cooled them off. It was pretty fun.

MARC: For aspiring artists, what kinds of software out there do you think people need to know about?

LE CASTLE VANIA: It’s all about whatever works for you, whatever sound you like. There’s definitely some cool software companies out there that I work with a lot. D16, FabFilter, Native Instruments, FXpansion are all really rad stuff. Another really cool thing is Dropbox. It’s so simple but if you’re working on a track with a friend it’s really useful because you can just drop stuff in the folder, it shows up on their computer and you can just trade files that way which I’ve been doing with a bunch of different artists lately. A bunch of producers and I have been sharing sessions and samples, sound patches for different plugins. Stuff like that.

LE CASTLE VANIA: I’m just wrapping up my album. We haven’t set a release date yet but it’s really close to being finished. We’re just wrapping some of the vocals, getting some different vocals on some of the songs. We’re talking with some really cool labels about what we’re going to do.

MARC: What can we expect on this release?

LE CASTLE VANIA: I’m really viewing it as an expansion of my sound because on the album you get to make more of a journey and experiment a little more. It’s definitely going to be me and my sound but just kind of a broadening of that sound.

MARC: A final message for the interweb?

LE CASTLE VANIA: Thanks for taking the time to check me out. Hit up my website [lecastlevania.com]. There’s tons of free downloads there or SoundCloud [soundcloud.com/lecastlevania], all my tunes are up there. Just check it out and see what you think and if you like, help spread the word and help me get out there for people to hear.