Coachella 2016 >> Some things happened during Weekend 1

Coachella >> is such a primo musical gala that boasts so many legendary artists as well as up-and-comers on one epic bill spanning 3 days. It's definitely one of the best festivals on planet Earth because of these performances but also all of the fun surprises and fun mayhem that ensues throughout the weekend. This year was no different than that standard and I got to experience yet another festival of magic during Weekend 1 at Coachella 2016 in Indio, CA. Here is what went down in case you were unfortunate enough to miss it. 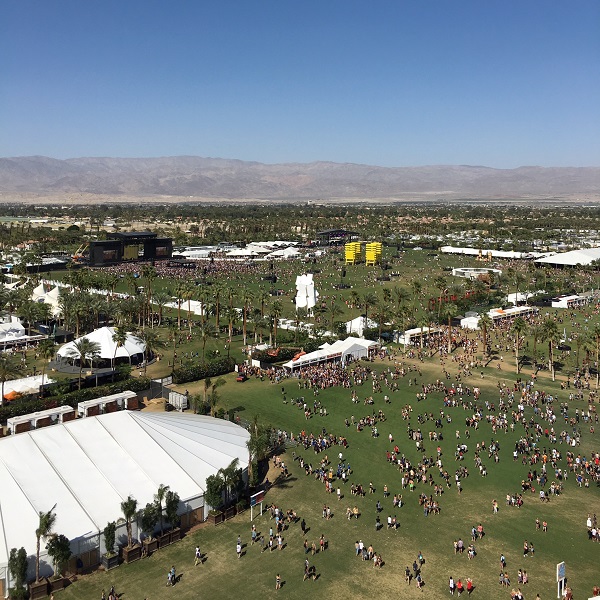 Guns N Roses reunited as a 2016 headliner and performed almost 2.5 hours of 80's dopeness behind frontman Axl Rose who sat atop a rock god throne of skulls and bones because of his own recent broken bones in his foot. He and Slash returned to their iconic form and reminded everyone at the main stage how fucking awesome they still are in 2016 during jams like 'Welcome To The Jungle' and 'Sweet Child O' Mine'. Angus Young of AC/DC shredded for a minute on stage too. Oh and its confirmed Axl will now front that legendary band as well. So that's rad!

LCD Soundsystem also reunited on the main stage the night before and proved they can still make all feet and asses nearby move to the sounds of so many hits that they certainly deserve more credit for. The rhythm and punch during 'Tribulations' was a blast back to 2005 when I bought the single's compressed audio file via an online storefront called iTunes to play on my brand new portable media player called the iPod Nano.

Jack U surprisingly had one of the best sets of the weekend. I have seen its individual components Diplo and Skrillex too many times to count so I wasn't dropping everything to see them again as a collaboration. But this duo really put together an electric set at the Outdoor Stage. I was immersed in one of the biggest crowds I've ever seen on any day at any Coachella, all of which just like me could not stop dancing like a fucking maniac for 45 minutes straight. It was a nice treat to see Kanye come out for 'Power' and somewhat of a letdown to not see Justin Bieber make an appearance for any of the Jack U tracks he's featured on. Did I just say that I wanted to see Justin Bieber? WTAF.

CHVRCHES' performance of 'Recover' during sunset on Saturday was the moment that defined why Coachellans make the trip out to Indio, weather the hot hot heat and endure the powerful winds and breathe the dry desert dust and operate fully on minimal sleep and energy. Because moments like these are how we 'Recover'.

Art of all sorts of mystifying curiosity was present, like an antique French bathtub tower that turned into a stack of gummy worms? 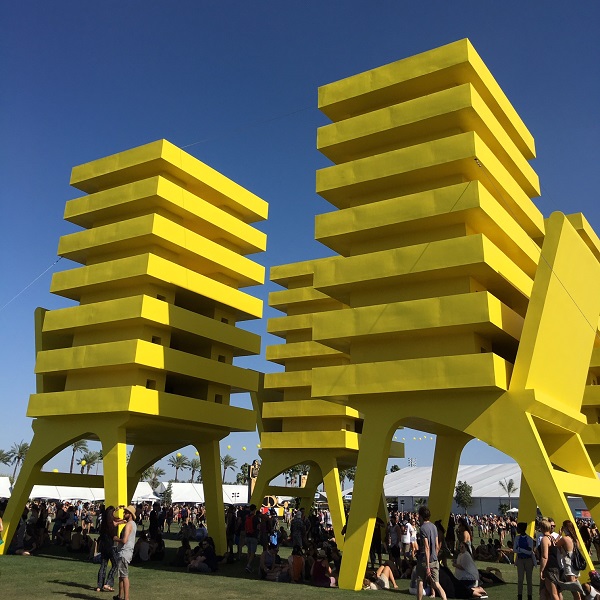 That turned into this thing at night.

Emily Ratajkowski and Vanessa Hudgens were hanging in the main stage beer garden 20 fucking feet from me! Just standing there. Right fucking there!

M83 performed a bunch of ill new tracks from their recently released Junk which is a fantastic album that everyone should listen to. Its third and most recent single 'GO!' was performed as the penultimate of the set and could have very well opened the door for it being the next track that people should auto-associate the band to, which is currently 'Midnight City'. This song is so good and even better live.

A category-4 basic bitch threw her bag down to the lawn amidst a stampede of people and dramatically screamed, 'HAVE A NICE FUCKING LIFE, CHELSEA!!' before dropping to her knees and crying uncontrollably. I don't know what Chelsea did but she didn't seem phased by such a threat and kept walking in the direction of the Do Lab. It was kind of an epic friend breakup for lots of lucky people to witness on the way to the Ferris wheel and the kind that makes you appreciate the friends by your side at Coachella because they would never do to you whatever the fuck that bitch Chelsea did.

Speaking of the Do Lab, Glitch Mob made a surprise appearance there on Saturday night.

Speaking of Saturday night, Ice Cube kicked it old school for us. Old school. Multiple times before performing a popular jam he would say, 'I'm going old school for all y'all right now'. You know, so we would know that he is going to dig deep and far back into his catalog for all of us. One of my roommates for the weekend observed it best, 'Why does he keep saying that? It's 2016 and you're Ice Cube. Everything is fucking old school'. Cube had a really fun set though. He got fellow NWA members MC Ren and Yella to rap along on stage for everyone to fuck the police to and even brought out honorary NWA member  Snoop Dogg to join the party in true west side is the best side fashion. What was a mass agreed upon prediction the week leading up to festival weekend was that Ice Cube would also have Dr. Dre and a hologram version of Eazy-E to complete the collective attitude. Having that excitable possibility ingrained in our heads this entire week without fruition only led to a slight letdown in that regard. But fellow rapper turned soft actor Common joined Ice Cube before the set was over so there's that. YAY YAY!!

Some bold and not so bold predictions did come true though.

MØ and DJ Snake joined the 'Lean On' party with Major Lazer. Disclosure featured live collaborations with Lorde and Sam Smith which we previously saw on SNL last year and highlights from Glastonbury the year before, respectively.

One guest appearances was a complete surprise but was lame as fuck. Zedd had a very hard hitting set going then decided to kill switch that shit by taking all the air out of his slot and the energy out of the crowd when he introduced Ke$ha to the Outdoor stage to sing her new song 'True Colors'. I'm not a Ke$ha hater and I admit I actually like some of her songs but this one is horrible and slow and could not have premiered at a worse time and place. Hayley Williams or Tove Lo or Ariana Grande would have been much much better choices to bring up on their respective tracks.

Miami Horror's colorful onstage garb matched the psychedelic visual on 3 large screens as they performed. Their bubbly, funky demeanor and sound made theirs one of the best slots of the weekend.

Robert DeLong featured Lindsey Stirling for a few songs so the crowd got to enjoy some super sweet electric violin and ballerina moves about the entire stage for at least 15 minutes.

Grimes graduated from a Sunday afternoon set under the Gobi tent in 2013 to a Saturday night headlining set in Mohave. Her crowd, onstage support and production seemingly increased tenfold thanks to her growth the last 3 years and my favorite album of 2015, Art Angels. Her set included tracks predominantly from that record which is definitely not a bad thing. She even got Janelle Monae to perform 'Venus Fly' with her on stage!

Speaking of female ascensions into stardom, Ellie Goulding and Sia have done just that but at a much more grandiose level. Both took late night set times and maximized their slots on the main stage with amazing performances and both gals deserve all the eyes and ears they're continuing to capture in 2016. Kudos, ladies.

I can't help but also adore Molly Rankin, lead singer and guitarist of ALVVAYS who wore an orange jumpsuit that looked strikingly similar to the San Quentin State Prison fall line of apparel. Fierce! Although her fashion decision was soooo last season she more than made everyone fall in love with her and that amazing dream rock when she serenaded the Gobi tent with 'Marry Me Archie'.

Lush did not make it to their set and canceled. Not sure why but it had better be a great reason to blow a great opportunity like this.

The Arcs were annoying. I really do like Dan Aurbach and The Black Keys and not much is different from that sound. I just hated that set. I don't know why. I wish I went to Courtney Barnett instead.

James Bay sang 'Let It Go' and stepped away from the mic to hear the entire packed Mohave tent sing along. I looked back to see and hear the crowd outside and those passing by and some entering the beer garden backwards doing the same. What an amazing talent! For real!

Incredible weekend. Hats off to Coachella for another hella successful event.