Bonobo >> To Dance, To Sway, To Be a Man and Not a Chimp in San Francisco [Regency Ballroom]

Posted on November 5, 2014 by Carmichael

Bonobo >> To be honest, until recently, I wasn’t quite sure who or what Bonobo is. Is it a guy? A band? A clothing brand? A type of eggplant? Who the fuck knows? I had seen the name thrown around and was aware that he/she/it/them was popular but never really bothered to explore. My interest was only caught when I saw he had done a Boiler Room Set and was coming to town, and I always enjoy the Boiler Room stuff. Well after his DJ set at the Regency, Bonobo has one more fan. Now when I meet people who I know will like his music I say ‘Have you heard of Bonobo? Well, it’s this one dude named Simon who makes really smart and extremely genuine chillout and he’s definitely not a type of eggplant’. 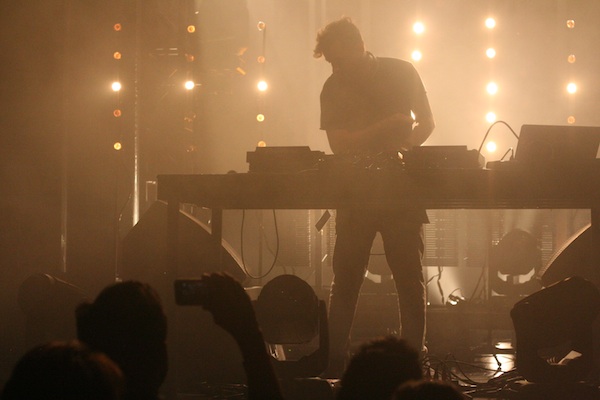 Some of you, like me, hear chillout and imagine really shitty, gross, pseudo-intellectual, boring, slow House music they play at wine bars. It is usually as played out and generic as the fucking tomato basil bruschetta you are eating. It’s the kind of music you listen to when you’re sitting on a mannequin display in an all white clothing boutique holding your girlfriend’s purse waiting for her to FUCKING PICK AN EARRING ALREADY! Bonobo is a different breed. It’s unpretentious; you can dance to it or at least rhythmically sway to it. It simply sounds good, and genuine, and real. It sounds like he cares about evoking an emotional response out of the listener, that he cares about making you feel happy instead of just trying to make you feel cool. Bonobo doesn’t make the kind of music that skin tight Armani Exchange V–neck, pointy snake skin boot wearing, greasy ass 45 year old bachelors listen to while they  spray cologne on their balls and get ready to go out.

The BPM’s of his music are higher than most chillout stuff as was the general energy of his set, which is a good thing as that, along with Simon Green’s ability to dynamically layer, build up and schedule the different tracks of a song maintained the listener’s interest.  Usually my ADD prevents me from liking most house derived genres, especially the really deep zombie shit; but Bonobo’s arrangements, choice of often hip-hop inspired beats, and the sheer melody of his songs kept me in the game for his entire set.

The crowd around me backed up everything I have just described. They were cool, in a cool way. They all looked like individuals, dressed and styled uniquely, who came to have fun, to dance, to listen to good music, not just to shoot Fireball and ‘get that dick wet brah’. The place was packed to the gills, he is clearly popular enough that I should have known who the fuck he was. And even though you had to start club walking the moment you went through the doors, the room lacked any claustrophobia, or anxiety, or stressful energy, the types of feelings you might have at a sold out Dubstep or Dutch House set. All due in no small way to Bonobo’s melodic take on post party chillout.

His elegant and simple stage set up added to this refreshing air of unpretentiousness that was the highlight of the evening for me.  A spotlight never was on Simon, in fact I have no idea what he looks like even though I was only a few feet away. The whole night he stood in complete darkness, backlit by the simple elegant colored lights that reacted to his songs as they progressed linearly. The bassline, beat and melody would grow in complexity as time went on, and in turn the lights shift in intensity, color and direction. Combined with the music, the experience was euphoric.

If you have read my previous articles, you might be surprised that I actually truly appreciate the finer things in life. Regardless of how many times I use the word ‘fuck’ or talk about people’s balls, I’m a classy motherfucker and I enjoy things that are special and beautiful and in turn show a bit of class. This Bonobo set was just that. It was clever, elegant, worthy of appreciation, artistic and concerned with the aesthetics. And because I found Bonobo, I can finally retire that Zero 7 CD I bought when I was in college.

As an afterthought….a bonobo is a type of chimpanzee, and that in the late 70’s, Jane Goodall observed a chimpanzee civil war over territory that involved acts of kidnapping and murder. You’re Welcome.