Mystery Jets >> are heading back home to the UK and just before wrapping up their US tour with Mumford & Sons, I got to shoot the desert breeze with these Brits during their hot stop here in the inferno of Phoenix. 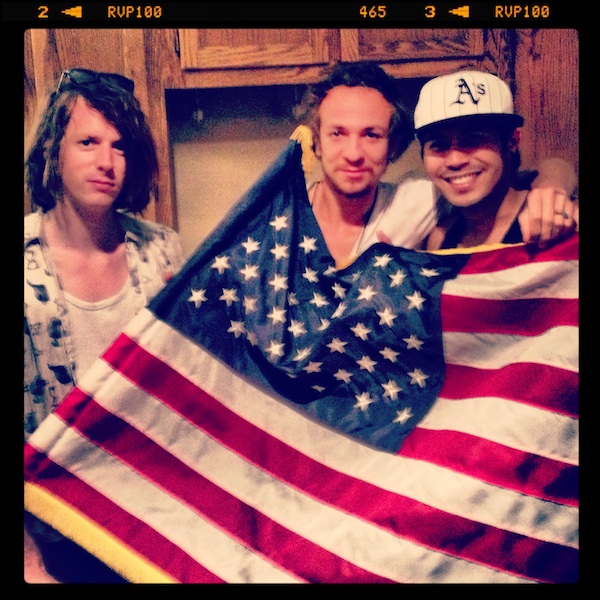 The founding members and frontmen Blaine Harrison and William Rees are mad cool. After the rendezvous through Scottsdale and a visit to the Rusty Spur we bullshat about their recent live album, what these blokes like to do on the left coast and they even taught me a few things about my old stomping ground's redwoods that surround Golden Gate Park in San Francisco.

Their 10-year tenure has been successful but they remain hungry and still humble. When I mentioned I was excited to add them to list of artists finally seeing perform live this year, they were honored to have been mentioned in the same breath as these artists that they too are quite fond of. Hopefully I get to see them again and maybe it will be on the other side of the pond this time.

MARC: What have you been doing here in the states when you're not on stage?

BLAINE: We haven't had a lot of days off on this tour but we've made the most of the days off we've had.

WILLIAM: In San Fran, we went to City Lights bookstore in the woods, which is incredible. When we were up in Washington State, we took a look at the Twin Peaks Café where they shot the series.

BLAINE: That was actually the craziest night of the tour we spent.  It's called North Bend. Obviously it's not called Twin Peaks, but it's where Twin Peaks is modeled, on that town.  Everyone there is in this weird denial of it and we were just going around all the spots that they shot all the different scenes. People were like, ‘What are you talking about? Oh, that TV show. We don't like to talk about the TV show.’ It's obviously close to the bone and it's like one of your small towns that not a lot goes on. There's just weird vibes.  We went to this biker bar and the owner got us hammered and took us back to his ranch out in the woods.  Made us drink 210% moonshine and eat steaks and listen to Dire Straits. The whole evening just had this very weird energy about it and we kind of like staggered home. We stopped to watch the Snow Colony waterfalls at about three in the morning.   But there was like, there was definitely something strange in the air.

MARC: How did you come to decide Austin would be the place to record the Radlands album?

WILLIAM: Originally we didn't. Half of us wanted to go to LA and the other half wanted to go to New Orleans.We couldn't decide which place. Austin's kind of slap bang in between and it's big so it kind of picked itself. Also, I think Austin's a good town to be in if you're a musician, if you're in a band. Because most people from Austin are in bands. So you feel like you're becoming part of the community.

BLAINE: It's one of the few places that felt like it was forward-looking rather than becoming obsessed with its own history. Texas to me feels like it's quite steeped in musical history in terms of country music and Austin is actually about kids doing something new. I mean, definitely informed by the environment around them. But you feel like there's new stuff happening there.

WILLIAM: Yeah, it's kind of everything Austin. You can stumble into a bar on any night of the week and hear great country music being played by old dudes. South by Southwest epitomizes that.

BLAINE: I think it is the way it is because of South by Southwest and it's an amazing thing. It's the most exciting music festival out there I think. Austin as a city is a reflection of that so we really liked it.

MARC: Where in the states would you like to record next?

BLAINE: I really like Portland and that felt like a sister town to Austin in a way. It's got a really good music scene and got really good beer.

MARC: I got introduced to your music back in 2008 but you've been around since before then. How did all this get started?

BLAINE: It's actually our tenth anniversary this year. From our first gig.

WILLIAM: But we were a band even a long time before that.

BLAINE: It was a dream before that and Henry was like our coach since the early days.  So this is really where the dream was born. But it really became a proper band when we left school. We've dedicated a lot of time to it, as opposed to getting real jobs.

MARC: You just released a live album from the The Royal Festival Hall in London. Was that a big show?

WILLIAM: About two and a half thousand, so it wasn't our biggest London show. It's more about the setting, the ambiance.

BLAINE: It's a very prestigious venue in London. It's like you're going to the theatre.

WILLIAM: Yeah the opera or something and we tried to treat it like that.

BLAINE: We made programs.

WILLIAM: Yeah, with all of our favorite bands. We invited people down to an event, as opposed to just a rock and roll concert so it was really cool.

BLAINE: We wanted it to feel curated.

MARC: So what's the difference between how you prepare for a show versus  one that you know is going to be recorded for an album?

WILLIAM: We prepare a hell of a lot for it.

BLAINE: Hell of a lot for it. We put together a gospel choir, which is quite a lot of work. They were amazing to work with, they were really cool. They'd all sung at different choirs, they'd sung on like Muse records and stuff like that. They hadn't all sung together before so we put them together and we called them the Marfa Lights, mainly because we made Radlands in Austin, and Marfa is in Texas. Then we had Laura Marling . She's an amazing singer, she's done a bunch of her own records. So she came out and then a couple of old friends. The whole thing felt like an evening rather than just a Jets gig. You can download it but we did it as a vinyl. Limited.

WILLIAM: And it's very much a vinyl experience.

MARC: I'm all over it then, I've somehow accumulated a lot of vinyl over the years and never listened to any of them. Now I finally got a record player so now I'm getting albums on vinyl only.

BLAINE: Which is how they would want you to listen to it as well.

WILLIAM: We really liked it.

WILLIAM: ‘Lose Yourself to Dance’ with Pharrell. It's a great track.

MARC: Both of the Pharrell songs and that one with Julian Casablancas are my favorites.

MARC: Speaking of collaborations and transcending genres, is that something you guys envision dabbling in more?

BLAINE: Yeah, we have. I'd say we've always been into that stuff.

WILLIAM: Generally, on every record we have a collaboration, or we'd do something around the time that the album comes out with other artists. This is definitely something that we'd be doing.

MARC: Any artists in particular you see yourself working with in the near future?

BLAINE: I'd say more often than not, it's things that pop up. It's not really something you'd think about in advance.

WILLIAM: You write the songs, you're in the studio with the producer, and there's like a string part or like something that. For example, there was something in our third record that sounded a little bit like a bagpipe sound and the producer was like, ‘Should we get a bagpipe guy?’ and we were like, ‘Yeah.’ We found this guy online, he came in and played, dressed up as a penguin. He had an electronic bagpipe.

BLAINE: We hadn't set out being like we want to have bagpipes in the record, but it's just one of those things that happened. We've also started writing for other people. It's the early stages, but I think that's the kind of thing that will inevitably form our own stuff with the Jets. It is separate at this point. We will go into the studio with other people but I think probably we'll make connections with that, people who will start sort of bleeding in.  I think it all bleeds in, and that's how it should happen. I mean, production-wise.

BLAINE: I think he'd be great to work with at some point. I don't think he knows who we are.

MARC: Are you cool with electronic artists remixing your shit?

BLAINE: Yeah, we've definitely had a period of commissioning a lot of remixes. We've got some really good ones that we're really happy with but I think that whole remix scene kind of boiled over a couple of years ago. I feel like suddenly everyone had Ableton on their laptop. Everyone was a remix artist. And I remember we did a remix competition, and it's like all of these remixes came back and they were all just like shit.

WILLIAM: One of them was quite good.

BLAINE: One of them was good. But, one.

WILLIAM: Well, the one was actually really good. At the end of the day, that's how Justice made it big. Their first remix was that Simian track and they won that competition and the song went on to be massive.  So I mean, it's all good.

BLAINE: Yeah, it provides an avenue.

WILLIAM: It helps people get out there. If there's people with talent, then it's only going to draw light.

BLAINE: Obviously, the shit ones won't make it.

WILLIAM: Yeah, you forget about it within half an hour.

MARC: What would you like to leave the readers of zBORED with?

BLAINE: Stop watching YouTube, buy a record. Come to a show! We're all about the live shows.