Busta Rhymes >> up in the place. True indeed. Yes, it's his 40th birthday today and that's word on my seed. That's a 'Woo Hah! Got You All In Check' reference for all y'all who remember his debut release The Coming. That album was one of my first CD's labeled as PARENTAL ADVISORY: EXPLICIT LYRICS so I had to hide that shit from my moms yo. Anyway, as a shout out to my boy on his birthday I'd like to share an essay I wrote on him for school back in 2002. Yeah, so I chose to write about Busta Rhymes instead of John F. Kennedy. Teacher said I could choose whoever I wanted so fuck off or just watch me get down and just 'Do My Thing' baby. 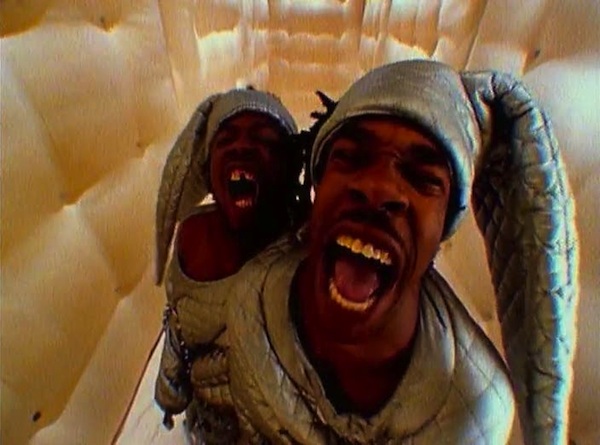 With his unpredictable rap style and undeniably outlandish yet urbane image, Busta Rhymes is a true original.  Busta is recognized by millions by his trend-setting fashions and his eccentric hairdo.  Not to mention his high energy level and humorous personality.

In this day in age, Busta Rhymes persists to be one of Hip-Hop’s most legendary artists.  Known by his unique rap style and an urban-Jamaican persona, the hip-hop genius broke ground in 1996 with his solo album The Coming and has not made any signs of stopping yet.  Busta Rhymes emphasizes on his ability to “keep it real” and to remain “raw”.

On May 20, 1972, Trevor Smith Jr. was born in Brooklyn, New York. The bright and innovative young man moved to Long Island in 1983.  A couple years later, Trevor started school at Uniondale High School.  There he met other inventive lyricists: Charlie Brown, Dinco D. and Cut Monitor Milo.  The foursome was eager to make names for themselves and eventually joined together to make Leaders of the New School.  Trevor Smith then grew to be Busta Rhymes.

Busta Rhymes, characterized by his distinctive Raga/Hip-Hop style, let loose at the age of seventeen and began establishing himself in the underground world of hip-hop.  Around that time, Long Island had already spawned some big names in hip-hop such as Eric B. & Rakim and Public Enemy.  These Long Islanders were big influences on Leaders of the New School’s first album A Future Without a Past in 1991.  The group encountered some success and released one more album in 1993.  Shortly after the release of T.I.M.E.: The Inner Mind’s Eye, the group separated.

The deterioration of Leaders of the New School was caused by disagreements among the members and frustration from lack of their projected success.  Busta discussed his controversy with VH1 during an interview for Behind the Music.

“Fuck Leaders of the New School at this point.  I ain’t making no money over there.  These niggas obviously aren’t trying to help us secure each other’s well-beings because we’re getting into so much dumb shit with each other that we ain’t even going to handle business no more…and I’m looking at that as a ‘Fuck me’ from them. More so from [Charlie] Brown…because everyone was showing up when we had shit to do, just he wasn’t.”

Without letting those hard feelings create a barricade to his success, Busta Rhymes spent time laying down tracks with various artists such as Craig Mack and A Tribe Called Quest.  Busta appears on a very well known classic by Tribe called “Scenario”.  He also made cameos in movies like “Higher Learning” and “Who’s the Man?”

Evidently, Busta Rhymes was on the right path to making some noise.  Shortly thereafter, Busta released his renowned single “Woo-Hah!! Got You all in Check”.  Almost instantly, the hip-hop genius transformed from underground to groundbreaking.  It was the realization that Busta Rhymes possessed a style like no other that made other artists wanting Busta Rhymes on their tracks.

The Rise to Stardom:

Thanks to the debut songs “Woo-Hah” and “It’s a Party” featuring Zhane, Busta Rhymes’ album The Coming did extremely well.  The mainstream hip-hop community was waiting for an artist like Busta.  This lyrical genius fabricated brilliant rhymes, superb beats, and an ever so amusing sense of humor while remaining an intimidating rapper.  Not to mention, the videos released at this point were quite entertaining and screamed outrageousness.

Busta Rhymes was quickly gaining popularity and on the verge of stardom.  Other artists recognized his individuality and before Busta knew it, he had laid down tracks for T.L.C., Boyz II Men, Mary J. Blige, and more songs with A Tribe Called Quest.

In September of 1997, Busta Rhymes released his sophomore album When Disaster Strikes.  The album contained very popular singles such as, “Serious” and “One” featuring Erykah Badu.  The album continued to climb the charts and became the first of four consecutive, platinum albums for Busta.  That same year, Busta Rhymes came out with a remixed version to his song “Turn It Up/Fire It Up” which was backed by a juked theme song from the television series Knight-Rider.

Busta Rhymes and rappers Rampage, Lord Have Mercy, Spliff Star, Rah Digga, and Baby Sham collaborated and put together the Flipmode Squad.  Shortly after the MTV’s award was given to him, the Flipmode Squad released their debut album The Imperial.  It was only a matter of time until Busta Rhymes made his biggest splash yet.

In the beginning of 1999, Busta’s highly anticipated third album hit stores and debuted in the top ten of the Billboard charts.  Extinction Level Event: The Final World Front marked yet another one of Busta’s highly successful albums.  This album’s content demonstrated Busta Rhymes’ versatility and wide range of style.  The album contained the international hit “What’s It Gonna Be?” featuring Janet Jackson.  The song reached the United Kingdom’s top ten and remained there for over a month.  Busta also collaborated with Ozzy Osbourne of Black Sabbath for a remake of Ozzy’s song “Iron Man”.

Also a bizarre yet amazing song could be found on this album that displayed Busta’s innovative video talent.  “Gimme Some More” became a hit in the U.S. and Busta was awarded Spin Magazine’s Most Creative Video Award for it.

In 2000, Busta composed another album called Anarchy.  Though not nearly as successful as Extinction Level Event, the album went platinum and lead to numerous movie roles for Busta that year such as “Shaft”.  Also, Anarchy was the final album Busta Rhymes released as part of Elektra records.

After releasing Anarchy, Busta Rhymes, Q-Tip from A Tribe Called Quest, and others teamed up to make an album called Violator.  The album is a compilation of a plethora of superb talent featuring each other on a variety of songs.

In November of 2001, Busta Rhymes’ most recent album was released.  Genesis hit the stores and immediately made a huge impact.  Though only released for a short period, the album is already platinum.

Busta Rhymes is currently touring the United States and promoting this excellent album.  Busta Rhymes’ zany antics never fail to woo the crowd.  He has appeared on several successful tours such as the Smokin’ Grooves Tour with the Fugees and the Smoke-Out Festival Tour with Cypress Hill.

Busta Rhymes, a smart and confident artist, strives to be the most revolutionary artists.  In the introduction of the song “Gimme Some More”, Busta narrates: “If I can’t be part of the greatest, then I have to be the greatest myself.”  These words depict his strategy of outdoing everyone, including himself.  He has done a spectacular job thus far and doesn’t seem to be slowing down.

One of the most respectable qualities Busta Rhymes possesses is the ability to remain original yet unique.  On Busta’s first album, the first track contains him repeatedly yelling, “I make sure everything remains raw.  I make sure everything remains raw.”  Busta has the power to make audiences and the hip-hop community stand agape while remaining true to himself.  He does not allow trends to overcome his style.  He is the one who sets the trends.  He constantly demands that MC’s should “keep it real” and to “come original”.  If these characteristics make an MC “raw”, then Busta Rhymes is bloody and the rest of the population is well done.