On my way to the venue, I had learned that Alice had been replaced. I was aware they had broken up for a reason that established Alice as one of my favorite musicians of all time [she left because the most genuine and honest electronic act ever wasn’t genuine enough]; but I assumed they simply got back together. I tried my best to be optimistic…..but who the fuck is going to replace Alice Glass? 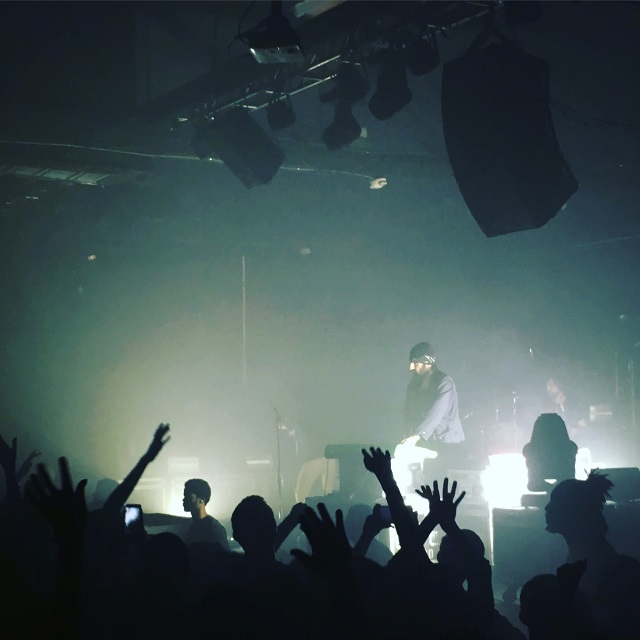 Crystal Castles has certainly evolved since their debut album in 2008, both stylistically and philosophically. The first album is challenging. On its surface you could describe it as the tortured sounds a Sega Genesis would make if you waterboard it after making it stay awake for 3 days. In fact, Ethan Kath has described why he made certain decisions on that first album, ‘To weed out the wimps, to annoy the posers. We are saying, ‘We are not for you’. The work mellowed out more and more over the subsequent releases, which I am assuming contributed to Alice’s departure. Taking their discography as a whole and compared to themselves, this progress is easy to see; but what makes Crystal Castles so special is how you compare their timeline to what was happening with the rest of electronic music. Introduce someone to their albums and have them guess in which year they were released, I would be surprised if anyone could guess. They remain independent of space-time, nostalgic with their 8-bit glitches, omni-present with their aggressive beats indicative of late 2000 electronic music where the masses were just discovering dubstep, and futuristic with vocals that sound like a choir of cybernetic angels. This last album struck me the same way as many bands facing an identity crises [see Hail to the Thief]. It wants to continue to move forward. Much like their later albums, it has clarity, it is melodic, it wants to have a point but in many tracks I feel as if Ethan is trying to harken back to the first album he described as ‘the most annoying sounds for Alice to scream over’. This may sound as a negative statement, but it’s not…I am older…they are older…Alice is gone…Edith is here…the new album is a new beginning without forgetting what has already ended.

Edith and Ethan did not say a single word their entire set. No introduction, no goodbye, no thank you Cleveland….and honestly I would have been let down if they did as they always appealed to my strong anti-poser sentiment. This needs to be clarified as anti-poser does not mean anti-establishment. Teenage goths rebelling against conformity by spending what I can only assume takes hours each day to put on a non-conformist costume is literally the most poser thing you can do. Picture a grown ass young adult looking in the bathroom mirror listening to music that tells them to ‘fuck society’ while their hair straightener is warming up. Someone who listens to good music, deep cuts, songs not ready for the masses but can also say that last Bieber album had a few good tracks [because it did] is the true definition of not being a poser. Crystal Castles always embodied this for me, they are subversive but because they genuinely wanted to be and they only want to create things they like.

Edith wore what look liked a Soviet Union commandant’s hat, with a baggy black t shirt over an even baggier long sleeve t-shirt. She wore sweat pants, army boots and shades that looked like Blublockers. She looked exactly like Nathan Holverson from high school. Yes I am aware only I will understand that specific reference but you know the kid from high school I’m talking about. I believe Ethan looked the same way he always does, I can’t be sure as I could not take my eyes of off Edith. At first glance, it looked like someone’s best Alice Glass impression [minus the spitting]. It could easily have been written off as that, but as she took control of new songs and old, it was clear as day that she was just being Edith, and that just happened to be a lot like Alice. Her attitude screamed unbridled passion about ideas and themes she cares about while relentlessly not giving a fuck about anything you or I might deem important. Throughout the set, Ethan stayed nearly motionless, bobbing his head gently to his own explosive beats, it was an appropriate counterpoint to the aggressive Iggy pop like stances Edith would take while wailing into the microphone drenched in sweat.

And while Edith lived up to the timberland sized shoes she had to fill, its Ethan’s music that was truly the star of the show. It was melodic, ecclesiastical and completely in-organic like the kind of music machines would make when they want to dance and they think no one is watching. When paired with Edith singing lullaby’s into 219 different microphone effects, it sounded like a gentle robot, high on cocaine, tucking you in at night.  The lighting package strobed with each syncopated beat making us feel like we were slipping in and out of this dimension.

Change is inevitable, and rather difficult to weather. Carving your own identity when your predecessor was a master of individual uncompromised expression can be rather daunting, especially with an audience that would be hard pressed to give you the benefit of the doubt. Is Crystal Castles better? Are they worse? Are they different or the same? Well, as Alice, Ethan, and Edith would probably answer…..Who gives a fuck you poser?