LIB 2014 >> From Coachella, to Outside Lands, to Life is Beautiful, I am pleased to announce that I am ending my year of music festival attendance on a high note. There were many goods and very few bads for the Las Vegas festival's second year. Now let’s break it down. 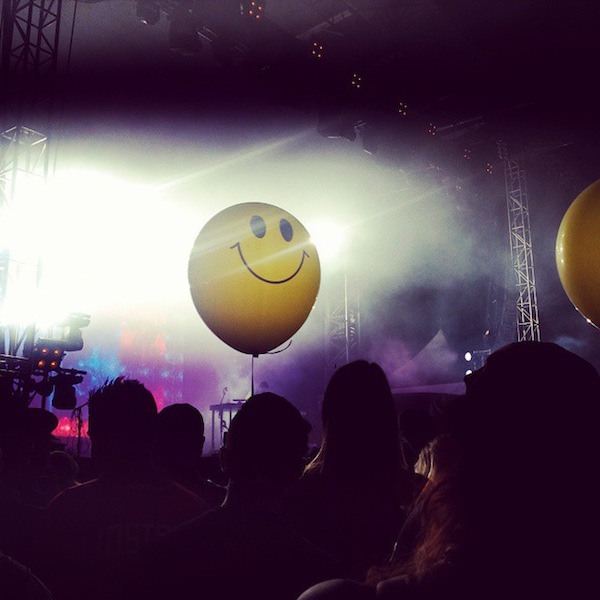 In the 3 days of musical paradise in the one and only sin city, Downtown Las Vegas served as a metropolitan jungle of music, food, and drink. Roped off just outside the heart of Fremont Street, amongst the prodigious buildings of fantasy and visual pleasure, there were many reminders that you were in a land of entertainment.

I didn’t know what to expect at a festival in the middle of a busy city, especially this being Las Vegas which already straddles a very fine line between tacky and incredible. What I found was surprisingly easy access to not only the venue but to the front of each show, options for things to do just outside the gate [if you needed a breather], and what I consider optimal festival weather, aka mildly hot and dry with a light breeze and warm nights.

Aside from the lack of grass causing constant pangs from the concrete below your feet, the location is unique from the typical festival polo field. This being the desert, it’s not exactly easy to make this work, though it would be a bonus if this could be accommodated in the future.

One of the top highlights of this festival [apart from the music]: no lines for bathrooms, food, or drink [!]. I mean, can it get any better? With each section strategically placed, there was never a long wait for much of anything. Maybe people went outside the festival for some cheaper food, and if that’s their choice then so be it. Personally, I don’t mind spending the money to try something fun and different.

The other highlight would be the fact that there was time to catch just about every show you wanted to see without overlap with equally popular bands. I only missed a couple of sets I wanted to go to, though that was largely in part to the fact that it is always difficult to get a group of people ready and at an event just as it starts.

For how many good chefs LiB had on the presentation roster, I was disappointed to not see more unique food options available to the masses. Yes, the Fleur by Hubert Keller tacos were amazing [as well as getting to meet him!]. The pork belly and quail egg sliders were pretty darn good as well. However, not all the chefs had booths, every other stand had either pork or sliders as options which became redundant, and there was nothing particularly unique such as the bacon flight or chocolate dipped s’mores I experienced at OSL.

Same with the beer. Maybe I’m just a craft beer junkie, but the options were limited. Though I will give mad props to the cocktails, as all were fantastic and unique. I’m a tequila drinker, yet that Jan Collins with vodka and a brandied cherry had me sold.

Unlike Coachella, LiB felt less hippie flowery/EDM spikes & furry boots, and more urban just-be-who-you-are. There was no right or wrong way to dress, with the noticeable exceptions of the Sergeant Pepper lookalike and the Mighty Morphin Power Rangers [aka my crew]. 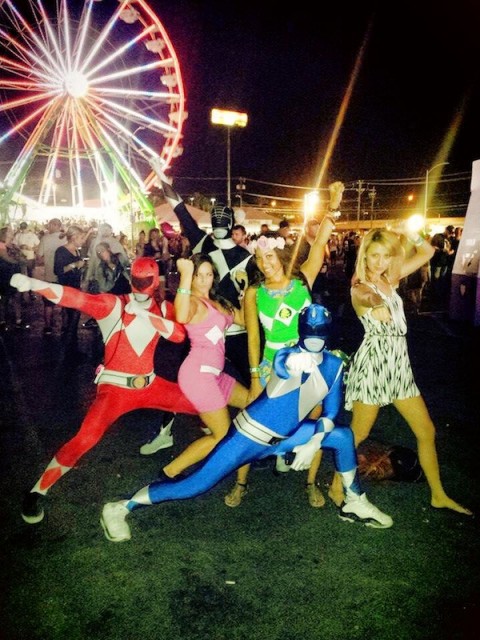 Drugs and over-drinking also didn’t seem to be the issue it is at other festivals, which is surprising given that it seems almost expected in LV. If anyone was tripping out I failed to notice, with the exception of the guy who walked up to me during Skrillex and randomly punched me in the ribcage [I have the bruises to prove it]. I also didn’t see a lot of police or paramedics. I really can’t say why, though I’m glad they weren’t necessary.

Hooray, live music! For once I have to say I was pleased with every band I saw, the music was great all around, the sound quality was perfect, and the performances were full of energy and each group seemed happy to be there.

On Friday, I’d have to say the highlight was Girl Talk. I’ve seen him perform at Coachella, and both times the only thing my body can do 'It Was A Good Day’ lyrics with the Pixies ‘Where is my Mind’ beat? Let me tell you—it works!

Other Friday shout outs include: Holy Ghost! suffering in the face of the sun while still sounding epic, Priory for being so ‘Portland,’ Sleeper Agent for making me have fun, RAC for being bubbly and light, Kanye West for being on-key for his first live performance ever, and Panic at the Disco for having a great live sound and show.

Despite day 2’s hangovers and swollen feet, there were too many good bands that we had to rally to get the most out of the day.

Saturday highlights are aplenty, so I’ll try to cover them all.

One thing I had to accomplish this weekend was FINALLY seeing Fitz and the Tantrums [woohoo!], and I was not disappointed in the least. I love their sound and the harmony of Michael Fitzpatrick and Noelle Scaggs in sync together, as well as the distinctive instrumentals. I’m pretty sure they covered the entire stage between the two of them and knew how to get the crowd going.

Tycho was fun as always. Mellow, refreshing, and perfect to enjoy with a drink and some food.

MS MR—whom I adore—sounded great as always. I love me some Lizzy Plapinger, who inspired the pink ‘do I rocked over the weekend. She knows how to work a show and performs as if no one is watching and looks amazing doing it. I love her checkered pants and crazy platform wedges, though I don’t think I can say the same about Max Hershenow’s sheer top which weirded me out a little. It’s OK, I still love them!

Lionel Richie worked it like the seasoned performer he is. I didn’t have it in me to stay the entire hour and half set or I would have fallen asleep with his slow ballads, though I loved the electronic backdrop that made you feel like you were flying the world with him.

I bumped into the extremely tall and deliciously handsome G-Eazy, though I unfortunately got caught up between Alt-J [so good!] and the Matt & Kim show that I missed his set. Until next time, G! 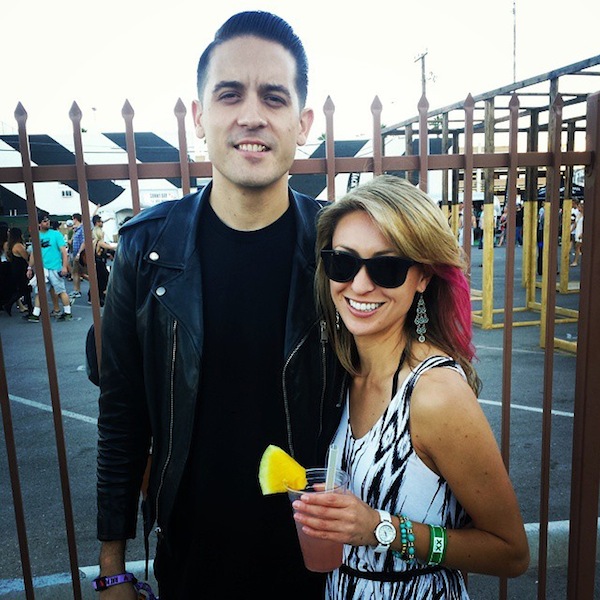 Speaking of Matt & Kim, can I just say, RI-DIC-U-LOUS!!! I can’t believe how much fun I had at their set! I like but don’t love their music, though after this performance I plan to see them as often as possible. The fashion choice of black and white leopard print jeans paired with a sheer black top and bra showed the tight body that is Kim’s, who twerked her ass out while standing on the drums. Matt nailed the vocals and got everyone jazzed up. The mashup between songs worked oh-so-well and have officially inspired my at-bat song. The best part of their set is when they threw out boxes worth of deflated balloons, asked everyone to blow them up, and then shouted out when to toss them into the air to which the sky lit up with yellow and orange balls and people jumping up and down to their next single. Clearly this was my favorite show of the day.

I can’t finish off Saturday without a shout out to Outkast, who played all of their top singles in the lengthy 2 hour set. Special thanks to friends of friends who got us into a cabana during the set, to which we drank extravagantly and lead to day 3 hangovers.

Sunday was rough, to say the least. I’m not sure how or why our group split up in the wee hours of the night, though fortunately we decided there was no rush to get downtown given how the majority were feeling.

Despite not being a big Mayer Hawthorne fan, I decided to check him out. Surprisingly I liked his set, particularly the band and his vocals, though I have mixed feelings about him as a person. Not sure I can explain why, he just seemed…odd. Oh well, maybe it’s just me.

Next up was Broken Bells, who I was bummed had bad speakers at Coachella, but sounded perfect here at LiB. James Mercer has beautiful vocals, and the harmonic sound of the band gets me in the mood every time. The backdrop was enchanting, encompassing the likes of astronauts and a rotating image of the big pink sphere of their self-titled album cover. With the exception of the drunk douche behind us in the Aaron Rodgers jersey yelling [not singing] every lyric to every song louder than Mercer, the set was great.

We caught the beginning of Galantis, and this duo is nothing but adorable. I couldn’t resist the ecstatic smiles on the faces of the two guys from Sweden, and I’m looking forward to what they have in their future.

On our way to Arctic Monkeys we stopped for food and ended up talking to a local singer who hails from Belgium. We enjoyed her conversation so much we missed all of AM [up close, at least], so we made our way back to Little Dragon and got our 'Ritual Union' on. Didn’t quite understand the tight white dress with giant furry coat and sparkly cap ensemble, though the set was fun and lively and her petite body worked the stage.

St. Lucia was on our way to Foo Fighters, and despite not being as well-known I was impressed with their sound and look. They might be my new band to watch, and I think they have a lot of potential as artists.

Foo Fighters. Oh, Foo Fighters. The band has been doing this so long they know how to get an audience moving. I’m bummed I couldn’t stay longer, as something in me needed to end the festival with Skrillex. I had such a blast dancing that I wasn’t paying attention when the dumbass punched me, so I walked off to get some water and air before heading back into the madness. The DJ himself had an interesting show. I was just so into dancing off the last bit of the night that I didn’t pay as much attention as I should have. Oh well, that means it was good, right?

To Sum it Up

All in all, I’d have to say the festival was better than I anticipated. Sure, there are some things I’d like to see more of, but overall the band and sound quality were great and music is ultimately why you’re going to a festival.

Other things to note:

I got some free swag, like temporary tattoos and a customized tote bag.

Many of the bands walked around enjoying the shows themselves. All were really cool about taking pictures and saying hello and appeared to be having an equally good time as everyone else.

I ate and drank more than my fair share of good options [that I wish there were more of].

I danced off all the calories I gained because the music was so good and exactly what I was looking for.

I will be going again next year.