Tropkillaz >> I turned 33 yesterday. I spent my birthday being old and tired, watching Dr. Who on Netflix while eating a box of Macaroons my girlfriend got me with my legs wrapped up in a Macaroon crumb covered blanket. So what the fuck am I doing at Trap City tonight? 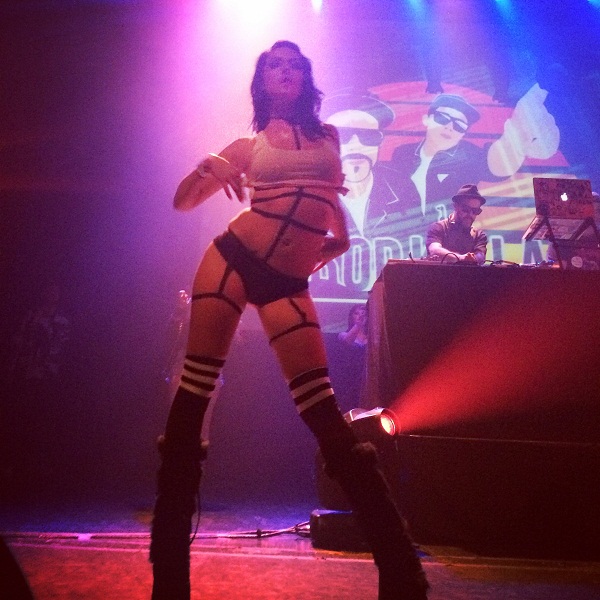 What am I doing in a dark room, fragrant with weed smoke and spilled beer, surrounded by young bodies twerking and dancing like some strange African Anteater Ritual? I'll tell you what I'm doing....I am being fucking awesome. I am letting the 808 driven sub-bass and machine gun ticks of the hi-hat in this strange trap/twerk/hip-hop/electronica set move my body and make my face all scrunched up, like this shit hurts in all of the best ways possible.

I didn't really know what to expect when I walked in. I went to this show because I was familiar with a few of Tropkillaz tracks, their work with M.I.A and Major Lazer remixes; but primarily I went because it was at the Regency, which is a couple blocks away from my house and I’m too lazy to go anywhere else. Despite my laziness, despite being that much further away from my 20's, I knew I had made the right choice as soon I stepped through the foyer. I let my body take over and quickly found myself brushing off my Timberlands and c-walking all the way into the main ballroom with a confused look on my face as if I had no idea where my ankles were taking me.

I, personally, am a fan of the dance art of…twerking. I feel it is indicative of modern youthful aggression, feminism and anti-classism expressed positively through provocative gyrating. This was especially true as all manner of females, from chicks that were clearly ratchet all-stars to nice parochial Asian girls wearing glasses, rhythmically vibrated their hips to near subsonic speeds. Who better than Tropkillaz to provide the soundtrack for this feminist uprising? It was a beautiful sight to see so many strong, proud, independent women, embrace their sexuality, unafraid of the stigma it might impose, and majestically do a handstand against the wall and flap their lady parts to DJ Zegon and Laudz Brazilian electronica inspired take on southern Hip-Hop. Although I only recognized their track ‘Assets’, they had the best set of the four DJ acts that took the stage.

On stage, each act was accompanied by a rotating cadre of twerk professionals. As their butt cheeks crashed up and down, I found my self caught in a hypnotic gaze, as if I was staring deep into Svengali’s butthole. The pro’s clearly put the twerking audience to shame with unparalleled skill and hip flexors primed to oscillate with the speed of a paint mixer, and when the black dancers came out…ooh lordy! I am sure the building was in danger of collapsing in on itself and I doubt anyone in the audience would have cared if a smothering death was the price of admission to this spectacle we were all witnesses to.

The music was full of energy, easy to dance to, easy to get excited about. It appears this genre of DJ music has also adopted the ‘buildup to drop/chorus’ arrangement of their sets, but instead of a raucous explosion of frenetic bass during their ‘drops’, instead came a thick syrupy slowdown that drenched the Regency Ballroom and force-fed us Lean in musical form. The reversal of the tempo that is normally expected was very fun. Tracks went from frantic, hyper speed dancing, with booties coming at you in every direction, to steady pulsing buildups, usually accompanied by repeating snap of a snare drum lifting you higher and higher into the air. Finally the beat drops and the room is moving in slow motion, through purple quicksand and almost backwards in time.

I doubt Thom Yorke and Kraftwerk would meet for coffee to discuss the nuances of textures and time signatures regarding this kind of music. Much of the sets of the other acts at Trap city were, in large, forgettable. Nonetheless, every track played tonight was danceable and most importantly, I [2 years away from 5 years away from being 40] had a great fucking time. So find a Trap City near you if you like dancing, booties, sippin’ on sizzurp and fighting the urge to feel and be old.