Nightmares On Wax >> Playing Phoenix for the first time this past Tuesday, Nightmares On Wax [N.O.W.] showed up ready to bring the fire beats, rock the sold-out show and flip the crowd's lids. 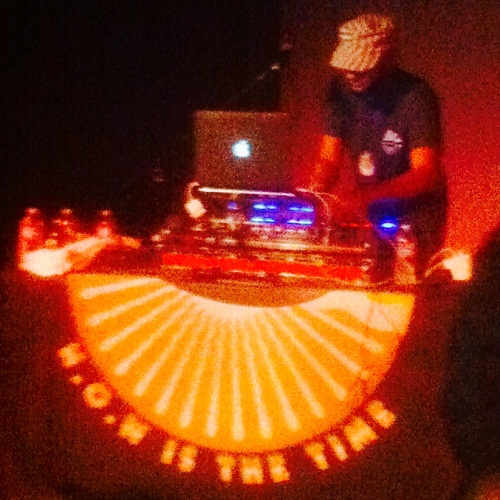 But before I give you the goods, I must point out if you've never been to the Crescent Ballroom I urge you to at least go to one show. A perfect sized venue to experience the show and get up and close with your favorite artists.

Now lets get down to business. I strolled into the ballroom around 8:30 to beat the long line that I foresaw coming and by 9:30 the show had sold out. N.O.W. reaches out to a large demographic from young to old, fans and non-fans alike. As for myself I was only familiar with the album In A Space Outta Sound and was overly ecstatic that I got to hear a majority of that album with a semi-live band [2 additional vocalists and a drummer]. I honestly thought it was going to be a strict DJ set but that's what makes N.O.W. great. Just like their music, they're full of surprises. Now I've been a fan since 2008 so getting a full on experience left me giddy as a school person [no gender bias here].

After sitting for what seemed like an eternity, smoking cigarettes and mingling with the crowd, the music cued up to my personal favorite 'Flip ya Lid' and what a perfect song for an opening. The night continued with many classic hits that I've wanted to hear for the better part of a half decade. Needless to say I was not disappointed one bit. The whole set was comprised of down-tempo chill beats converting to faster paced get down themes, including a very well done crowd sing along to 'African Pirates'. The best part of the whole show was when he stepped off the tables, donned the microphone and sang side by side with his crew.

It was a short set or maybe I was having too much fun, but at the end he clearly announced if anyone wanted to do a meet and greet he'd be by the merch booth. Of course I jumped at the opportunity. Waiting desperately in line behind countless autograph and photo hounds, I finally made it to the front and got to have a solid five or so minutes conversation with the man from Ibiza. We talked of sacred geometry, tattoos and of course our passion for music. I really wanted to press for an interview and quick photo but I have way too much respect for this artist that I didn't want to come off fanboy-ish. I have no regrets.

Overall a truly blessed experience and a musical bucket list check off. I highly recommend catching N.O.W. at your local venue or music festival. When the opportunity presents itself do yourself a favor and go...you'll 'Flip Ya Lid'.

Like Loading...
This entry was posted in music, party, shows and tagged african pirates, dj, flip ya lid, ibiza, in a space outta sound, james, nightmares on wax, phoenix. Bookmark the permalink.