California Roots Music Festival >> As any good Rastafarian knows, Jah provides. And Jah sure provided an amazing weekend in Monterey at the Cali Roots Festival. The three-day festival, in its fifth year, provides plenty of smiles, good vibes and of course, great music but is also much more. 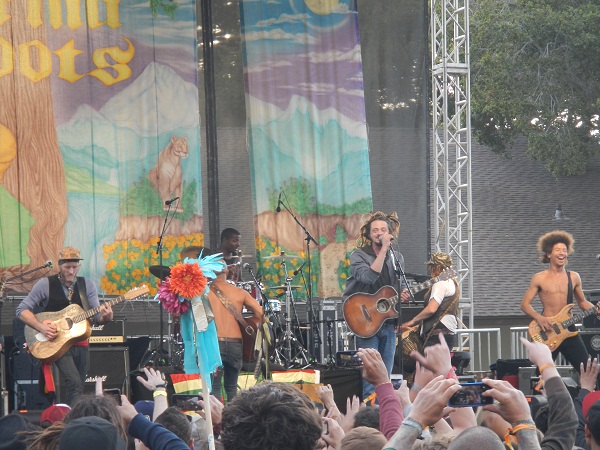 Set at The Monterey County Fairgrounds the simple venue provides a setting that is a throwback to simpler days of music and a world away from the hustle and bustle just outside. The organizers also bring in artists who paint along on stage with the artists providing a unique visual window into and beyond the music. They also have a zero waste program and work well with the socially conscious and green crowd only a reggae festival can bring in. It’s truly amazing to see how much this festival and the Reggae-Island genre have grown in the past few years.

Now on to the music! For those not familiar with the Reggae or Island genres, I bet you’ll still recognize some of the huge names drawn to the Monterey Peninsula this past weekend. Here is a quick run down of some of the highlights and insights.

J-Boog pretty much unknown by most prior to the weekend put on a great show to get the day started and everyone seemed like they knew his music by the end of the set. Or maybe they just wanted to be a part of what he was putting out as he did seem to be everyone’s best friends by the end of the weekend. He went on to play with The Green and both Friday and Saturday night headliners SOJA and Rebelution. We also got to hangout with him for a bit at the Planet Gemini after party where he was a man of the people hanging out, buying and carrying industrial size buckets of Dos Equis for all his band members and whatever pretty ladies in their corner happened to need a frosty cold beverage. He was definitely one of the coolest and most diverse artists of the weekend, J-Boog, the Nate Dogg of Island music.

Steel Pulse was the first big name in the main bowl and on the headlining stage. If you haven’t heard of Steel Pulse, you probably don’t have much of a pulse on reggae as these long time legends have been around forever. Though you might not know the words to their songs [or even be able to understand them], they are old school reggae through and through and you can’t help but to be feelin’ irie. Their lead singer David ‘Dread’ Hinds got the crowd’s energy up leading in to the headliner, dancing around on the stage in what looked to be part dashiki, part circus tent and part rainbow parachute. Whatever he was on the crowd wanted some and could not get enough.

SOJA closed down night one in spectacular fashion. Having seen them rock much smaller venues for over two hours with nothing but hits I was excited to see how they would pair down their show to just over an hour. For those who haven’t heard them, picture rocking out while simultaneously getting socially educated about the world and empowered to go make a difference. I must say it’s a powerful feeling when you and 10,000+ strangers get on that same page. In addition to previewing some great new songs off their upcoming album, what most people will find most memorable was the fire. That’s right actual fire. As a historical note Hendrix famously set his guitar on fire at this venue in 67, and SOJA paid tribute setting a blaze to one of their own. This may have been a Reggae festival but that was rock star status on all accounts.

Saturday started out with some top notch journalism as we sat in on The Rebelution press conference, since they were headlining that night. Really awesome to watch a band go from back yard frat parties in Santa Barbara, to 100-person clubs and free beach concerts in Hermosa Beach to being top billing on Saturday night of the largest Reggae festival in the US. Having heard them slowly release songs from their new album for free, I wanted to know more and asked about what if any collaborations we could expect. They were actually really excited by the question as this is one of the first times they’ve had other vocalists on one of their albums. Spoiler alert: expect some killer tracks coming in the next few months featuring Aruba born Collie Buddz and Kingston’s own Don Carlos.

They also rocked the hell out of the main bowl but having seen them so many times prior and having had two or ten Sierra Nevada’s and really ‘getting in to the spirit of the music’ no special details to report other than I know I had a pretty kick ass time and was because they put on a kick ass show as they always do.

Now for the story of the weekend! Nahko and Medicine for the People. Write it down. Get to know them. Download everything you can as these were the surprise artist of Saturday and might have just stolen the whole damn weekend. At a big festival there’s always one band that you go home and tell your friends about and this was them. Not just for me, by the way. This was the common and overwhelming theme from everyone I spoke to the rest of the weekend.

They played the second stage midday and brought it from the opening chords. With a similar sound and message to SOJA but with a vibe all their own they captivated the audience and had them jumping to songs they’d never heard as soon as they stepped foot on the stage. Being in between larger acts on the main stage lead singer Nahko’s magnetic energy sucked in every passer by and soon there was a crowd as far as the eye could see jamming along. Other highlights include SOJA lead singer Jacob Hemphill joining them on stage and singing a few choruses of their new single ‘I believe’ which Nahko is featured on. Before he left via stage left he pronounced to this crowd-crowned Nahko and Medicine for the People as ‘best new fucking band on the planet’ which drove the frenzied crowd to another cloud.

Their hour-set which was ended seemingly abruptly and left the crowd wanting more. In all of the shows I have been to I have seen a lot of encores. At this point they almost seem passé as bands hold back one of their best songs for the obligatory last song. This was different. This was something special and an actual encore that worked. An unrelenting crowd that simply would not take no for an answer eventually urged a seemingly unprepared and clearly touched and flattered lead singer back to the stage. All other instruments and speakers had been unplugged and packed so he came as one man with a message vibing and seemingly freestyling alone off the energy the crowd was giving as he had clearly left it all on the stage prior. You might have come to this festival for the music but what you got was a show and a peak inside of an up-and-coming force in Reggae music.

Get on board now while you can still get a ticket on their current tour. For those of you in the Bay or going to Outside Lands, lucky you they’ll be bringing it at Golden Gate Park on Friday August 8th.

Sunday wasn’t for the indie bands. Sunday was for all big names in the main bowl all day.

The sun had finally come out after two days of fog and wind and everyone was ready to party away the last day and go hard the last day of the festival.

Hawaiian local favorite, The Green started off a lineup of four bands in a row on the main stage and most likely in front of the largest crowd they’ve ever seen at a full stadium with 10K+. They may not be traditional Reggae, but their island vibe and Hawaiian stylin’ was certainly in the wheelhouse of the early crowd who used their mellow and catchy tunes to partake in the green of their own.

Needless to say, after The Green, the crowd was ready to keep it going. Who better to step up to the plate than Pepper. They saw a full bowl and they were ready to hit it. A lot of reggae has a positive message about tolerance, social consciousness, environmental awareness and just plain good vibes. Then there’s Pepper. They are a great reminder that sometimes music can still be about partying hard, getting f’d up, and banging chicks. Pepper, always unapologetic, amped up this theme to the next level and at times the girls on top of dudes’ shoulders singing their face off seemed to carry the tunes. Great music? Probably not. But good time? Most definitely. Well played, Pepper.

311 and Damian Marley wrapped up the weekend in the story of two shows. 311 did everything right. Played all their hits. Sounded flawless as expected with so many years of great shows under their belt. However, although enjoyable I felt as if I could have listened to any of their many albums in my car on the trip down and been just about as excited, which was disappointing. But don’t worry, 311. I still got love for you and ‘Amber’ is still the color of my energy.

Damian Marley on the other hand came out the gates like a crazy person. I know probably a fraction of his songs compared to 311 but he had me dancing around like the super white dork I am from Reggae horn to Reggae horn and had me at every ‘Barrrrraackk Stickem!’ along the way. He has an angry edge to his Reggae that cuts sharp and clean while still being upbeat. His two songs I do know, one with NAS and one with Skrillex, he decided to just go ahead and kill all parts by himself. How does a reggae artist do Dubstep by himself you ask? I was there and I’m still not sure but it was pretty amazing. Do yourself a favor and go check him out if he’s in a town near you, whether you know what’s happening or not, you’ll be glad you went.

Until next time, Cali Roots and zBORED, be good to one another and make the movement move!