French Horn Rebellion >> Up All Night in Phoenix [Crescent Ballroom]

French Horn Rebellion >> made their return to the desert for a dope show at Crescent Ballroom in Phoenix on Wednesday. It was a chilly night downtown but in no way was it chill as the duo and Co. got butts off of the bleachers and moving around on the dance floor to the awesome sound of band geeks gone wild. 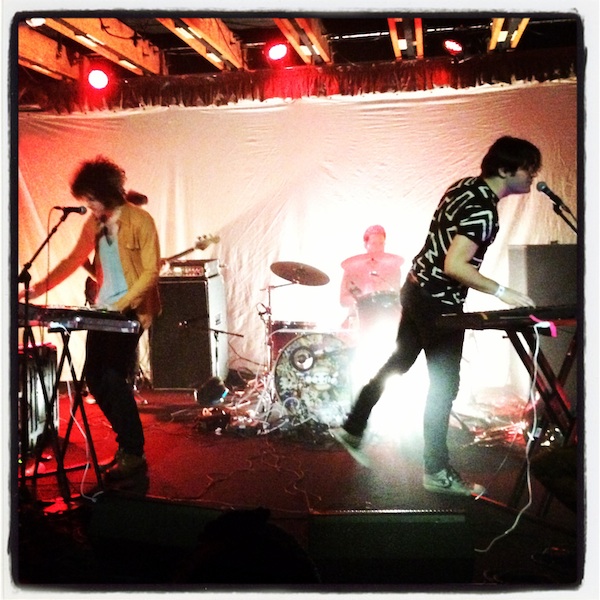 The bill also featured Holy Coast with DJ sets by Slow Magic and Jared Alan kicking things off at 8. Thereafter, a seemingly endless flow of dancing sneakers trickled into the ballroom.

I first caught wind - or brass, for that matter - of French Horn Rebellion in 2011 when they opened for Yelle uptown at the Rhythm Room. Brothers Rob and David performed live by their lonesome then. For this leg of the tour, their trademark synths and French horn formula on stage was accompanied by 2 other dudes on drums and bass along with a hot chick on backup vocals for a really full sound.

It was a really stellar show from start to finish. They crushed a lot of the jams from their 2011 album The Infinite Music Of French Horn Rebellion including my favorite, 'Up All Night'. The set also featured crunchy remixes and a dancey cover of 'Don't You Want Me' by Human League.

Aside from the talent that has clearly evolved over the last few years, I really enjoyed the charisma that has perhaps also developed. Rob's fun demeanor, super spin moves and antics are an added bonus to the show for us in attendance and even the folks he shares the stage with.

I spoke with Rob before the show about kicking off the left coast leg of the tour and his excitement for performing in Phoenix again was obvious in our conversation and then illustrated via the performance. It's always nice to go to a show where the performers are humble and also feel rewarded in the experience.

We later discussed more about the performance, the band's direction and a ton of random shit that cracked me up for days. Be on the lookout later this month for my full interview with French Horn Rebellion.