Saturday Night >> as I walk into the Regency Ballroom in San Francisco, Amtrak is in the middle of his DJ set. There is a guy in a red velvet bathrobe doing the Roger Rabbit. I'm like 'Bro, I already tried bringing that back like 3 years ago.' The girls wore their skimpiest, knee high fur boots, booty shorts, tube tops and the same glasses Dustin Hoffman wore in Tootsie. The energy was high. The crowd was positive. Everyone was on the dance floor except for one guy on the balcony in a fucking dress shirt; but at least he was here and a fan of Netsky is a friend of mine. 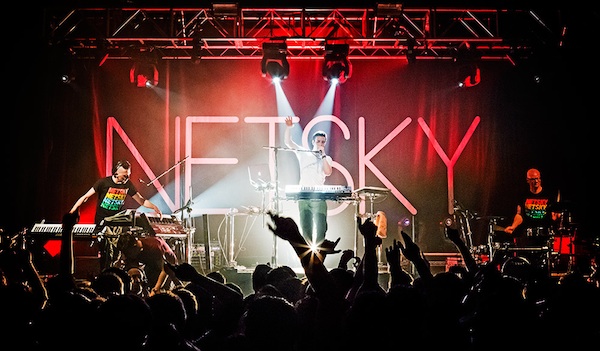 San Francisco was treated with a full accompaniment of musicians to play Netsky's refined and explosive brand of Drum and Bass. The guy even had a fucking hypeman for god's sake. How many Belgium DnB acts come with a hype man who emceed the room like it was still Electric Boogaloo? Commanding the room like Napoleon, we were putty in his hands. When he ordered us to shout 'yo' at the precise moment right before a massive drop, we did so without hesitating then succumbed to the river of bass that followed.

Having never seen it before, live DnB was extremely effective. This was especially true when we were treated to the live addition of Billie's luscious voice as she sang over 'When Darkness Falls'. Billie is a long-legged, blonde, beautiful white woman who has pipes like the chick from C+C Music Factory.

Netsky stood in the center of the stage, surrounded by electronics.  He conducted his drummer, keyboardist, and hypeman like an orchestra. The shit was a motherfucking headbanger - and that is the most eloquent way I can describe the fullness, beauty and power of his compositions.

From the soulful intro to 'Love Has Gone' to when the hype man asked us all to raise our lighters in the air during a buildup [yes I did it and it was cool so STFU]. The set had many high points and well exceeded my expectations.  By the time 'Give and Take' was over I was drenched in sweat, feet throbbing with a grin a mile wide and having an incredible time. If there was a level in Mega Man where you go to a dope club and have a really great time dancing with strangers, 'Give and Take' would be the background music.

My lord the drops were so grimy. I love Dubstep as much as this fucking guy next to me doing 2001 raver jazz hands while wearing white gloves with colored lights on the finger tips probably does - but it was exciting to hear filthy spine shattering drops AND actual musical notes being played at the same time. At each drop, the floor would undulate and the crowd would lift into the air in unison like one giant organism losing control over its body. Where Dubstep drops feel more like I am being slowly destroyed and smothered into the ground in an amazing way, Netsky's DnB-Liquid drops felt uplifting and restorative.

See him live. Buy his new album 2. Remix his shit - and find yourself a reliable hype man to journey the ups and downs of life with you.