Pinback >> made their return to Phoenix on Thursday night for a stop on their Information Retrieved tour. After many a performance all over Tempe over the years playing shows at Marquee Theatre, The Clubhouse, Sail Inn, etc. they have finally made their way to downtown Phoenix proper and killed the sold out show at Crescent Ballroom. 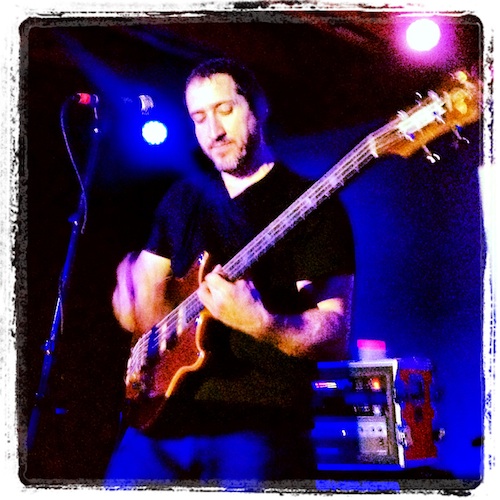 While this tour was to promote the new album, Information Retrieved tracks were plentiful but didn't dominate the setlist. Lots of classics from across all their albums like 'Boo' and 'Penelope' from Blue Screen Life, 'Fortress' from Summer in Abaddon, and of course 'Good To Sea' from Autumn Of The Seraphs. I like the new album but it's definitely not superb like the aforementioned releases.

During 'Fortress', guitarist Rob gave the mic to me to sing the first hook and everyone else around me took turns to go thereafter. Then he parted the crowd like Moses and the Red Sea to sing the next verse near the people in the back and up throughout the ballroom bleachers.

A few songs later Rob took off his guitar and did the worm dance across the stage. This was the most energetic I've ever seen him in the roughly 8 times seeing Pinback. Perhaps he was a little buzzed than usual? This was the first time I've seen him use a beer holder on his mic stand as well as a cooler full of bottles on stage at his feet. Great stuff. Another great show by the San Diegans at a great venue, to be expected.